Starbucks’ holiday treats: a winner, a turkey, and what came in between

As it turns out, our Black Friday shopping trip was really little more than a thinly disguised excuse to try Starbucks newest holiday treats… 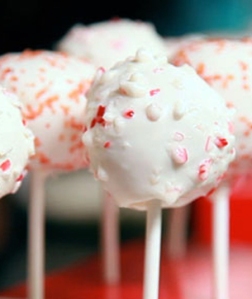 The Peppermint Brownie Cake Pop, which wowed all four taste testers*, generating comments such as “Wow!” and “Awesome!” (And this is after we generally panned cake pops in our previous Starbucks rankings.)

Said my sister Traci: “I just wasn’t expecting it to be that good. And moist — it was really moist.”

That extra moistness comes from buttercream icing mixed into the cake batter, along with candy cane bits. It’s then dipped in white chocolate and sprinkled with more candy cane slivers.

Nutrition: 170 calories, less than 1 gram of protein, 24 carbs, 8 grams of fat and 0 fiber, which comes out to 5 Weight Watchers points plus.

So lousy nobody even wanted to finish it....

The snowman cookie pop was so dry and crumbly no one felt like nibbling up past the bottom snowball — which is a good thing, because according to the package it was a shocking 370 calories.

(I couldn’t find this prepackaged treat on Starbucks website, so I’m not sure about its other nutrition data or how many Weight Watchers points it might be. A bunch, I’d say.)

Another irritation: The only decorative features on the snowman were on the plastic wrapper, while the cookie itself was faceless as well as tasteless. Bleah!

This is really tasty, and the only offering of the four with real fruit in a nice Christmas-y red. Since I don’t like mint of any kind, it would be my nomination for champion status except for one slight problem: At nearly 300 calories, it comes out to 8 Weight Watchers points plus!

So … I would definitely order this, but I’d want to share it with someone.

Decent, festive and a not-too-awful 5 Weight Watchers points plus. Trouble is, I don’t like to give up 5 points for something that’s merely decent.

*Taste testers were my daughter Rowan, my sister Traci and her daughters Madison and Monroe, who at age 7 was venturing out on her first Black Friday trip. I didn’t participate in the peppermint pop test as I don’t care for mint.

Rowan and Monroe, holding the Snowman cookie pop before anyone realized how disappointing it was.