I’m not an animal person, but I couldn’t resist giving goat yoga a try.

It was a fundraiser at our local YMCA. Seventy-five people spread their mats in the gym while 10 small goats wandered among us, bleating nonstop, climbing over people and, on occasion, peeing on their mats.

I was never in any real danger of having my mat peed on because any loose goats that wandered my way were usually snagged by animal lovers who wanted to snuggle (and/or get out of doing the yoga poses).

Like beer yoga, goat yoga takes away all the pretension. You can only take yourself so seriously in the midst of baby goats.

I suppose it’s also a test of your mindfulness abilities, though I seriously doubt anyone was focusing overly much on their breathing amid all that bleating.

The goats belonged to a farmer I went to elementary school with. He sat on the floor in his overalls but did not attempt any yoga poses.

Was it amusing? Sure. Would I do this again? Probably not. But if it becomes a thing that one must practice yoga with an animal, I guess I’d rather do it with goats than, say, grizzly bears or boa constrictors. 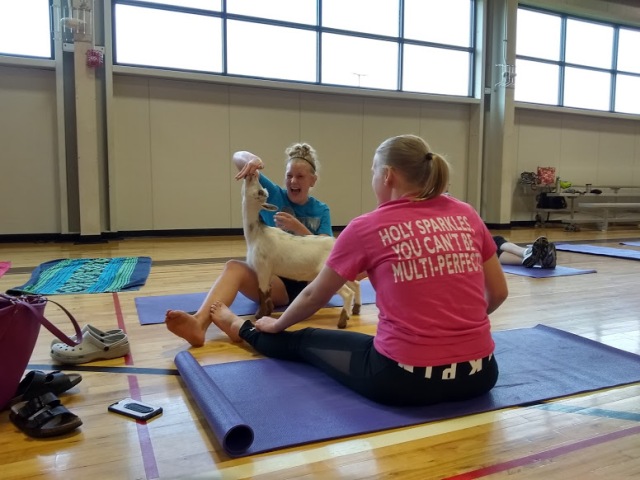 Like Loading...
This entry was posted in Uncategorized and tagged goat yoga, mindfulness, YMCA fundraisers. Bookmark the permalink.