There’s a Chinese parable I read somewhere once about a farmer whose only horse ran away. 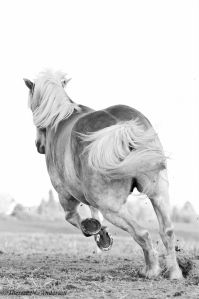 “What terrible news!” his neighbors said. But the farmer replied, “Who knows what’s good or bad? Only time will tell.”

The next day the horse returned with several wild horses, and the farmer’s neighbors  congratulated him on his good fortune. But his reply was the same.

Even if you’ve never heard this story, you can probably guess where it goes from here: The farmer’s son breaks his leg trying to tame one of the wild horses (“what terrible news!”) but then is spared when the Emperor’s troops come through the village demanding every able-bodied man join up.

When Colleen suddenly refused to go to yoga class last week, suggesting we try a youtube video instead, I feared our latest foray into yoga was over. We’d already missed two classes while on vacation, and needless to say we never got around to doing yoga on the beach.

Without other people in class noticing if we didn’t do the poses, would we bother to try anything difficult?

The answer, in my case, was no. I was grouchy and uncomfortable, unable to get over this shift in our routine.

But Colleen did, probably just to spite me. And once I got over my aggravation at starting in “easy seat” (with my hips, there’s nothing “easy” about sitting cross-legged), it turned out we both really liked the instructor.

Now, a week later, instead of never doing any yoga unless I’m at class, we find ourselves in the midst of a 30-Day Yoga Challenge. 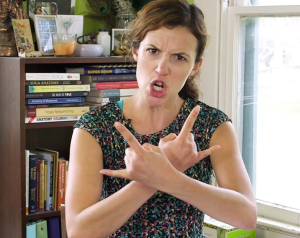 We started out with Adriene. We both liked that she’s very real, neither perfect nor pretentious, encouraging you to explore, wriggling around within a pose to find what feels good or interesting to you.

But then one night, craving something short and simple, we found this 15-minute relaxing beginner’s series from Yoga Journal. Even though the narrator has a weird detached omniscient Star Trek voice, it really was both easy and relaxing. (It was also cool to watch the virtuoso on the screen. He wasn’t showing off being a human pretzel. Just the opposite, really – I loved the way he glided easily and efficiently from pose to pose, as if this is how the human body is supposed to work if you’re not all bound up by stress. When the video was over, I found myself watching the next one just to gawk.

But the highlight of the week was the night I was just goofing around while listening to one of Bob’s old classical records. Not surprisingly, I started out doing all the easy stuff I like best. But then, on kind of a mission now several days into this challenge, I decided to really explore this tight-hips problem.

In class, I’d gotten to the point that I just accepted my limitations and sat with my legs straight out in front of me, knowing the YMCA instructors are way too polite to object.

But here, alone in our living room with my 52-year-old muscles and the timeless tunes of both composer and musicians long since dead, I leaned in to the knots and kinks and unresolved grudges at the intersection of hip and leg.

In doing so, I thought about how I’m always pushing these muscles along in relentless forward motion, rarely giving them an opportunity for a sideways meander.

Even going to yoga class had been something I’d approached like doing time on some taskmaster’s treadmill. It was time to step off and go exploring.

Like Loading...
This entry was posted in Uncategorized and tagged chinese farmer, only time will tell, yoga, yoga treadmill. Bookmark the permalink.