Looking for some holiday eating tips for an upcoming newspaper column, I stopped by Debbie Powers’ Weight Watchers class Sunday afternoon – where over half the members managed to register a loss for the week in spite of Thanksgiving.

“In 34 years as a leader, I don’t think I’ve ever had a group with this much success after Thanksgiving,” Powers said.

As Powers quizzed the class on what helped them survive what they called “D-Day” (Decision Day), one woman who hosted a gathering said she used small serving spoons to scoop out a taste of everything that looked good.

“There was space between everything on my plate,” she said. “Nothing was touching.” 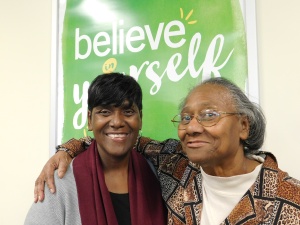 Debbie Powers, left, and her aunt, Frances Milan, who first took Powers to Weight Watchers when she was a hefty teenager in the 1970s. Powers lost 100 pounds in her successful quest to make the school’s pom-pom squad.

Powers’ Aunt Frances, who first took her to Weight Watchers when Powers* was a hefty high school student in the 1970s, reported that she ate a plate of steamed vegetables before attending this year’s feast at a relative’s house. Frances was down three pounds, though she noted that it probably helped that she didn’t have to cook this year.

A woman named Karen said she took a fruit plate and veggie tray to her family’s gathering to make sure there would be safe foods to snack on. Knowing she was craving her Aunt Cheryl’s stuffing, she allowed points for that but skipped the mashed potatoes and gravy, which isn’t a once-a-year opportunity.

“Normally I get a whole plate of desserts, but this year I only had half a pumpkin roll,” Karen said. “It was empowering.”

A member named DaVonna, who recorded a half-pound gain, said she knows what she wishes she would’ve done differently: Eaten something healthy and filling before she started cooking for her 30-plus guests the day before Thanksgiving.

Because she neglected to take this precaution, DaVonna ended up using up all her extra points before the big event arrived.

“I feel like I should’ve been better prepared,” she said. “But now I’m motivated to do a better job at Christmas.”

Looking ahead to the coming weeks of holiday excess, Powers’ class came up with these tips to focus on:

Finally, Powers offered up this tip for people who know they are likely to feel too busy to get to the gym or do their usual workouts: Do some extra walking while you’re at the grocery store. Don’t just park farther away, but take a few laps around the store either before or after you do your actual shopping.

“I’ve been doing that,” Powers’ Aunt Frances said – so much so that she drew the attention of the store’s security guard, who observed that “you’re here every night, and you got nothin’ in your cart.”

“I explained what I was doing,” she told him, “and he said that was probably a good idea.”

*To learn more about Debbie Powers’ weight-loss story, and other people who have managed to maintain a weight loss for several years, check out my new Weight Loss Masters page, a result of my ongoing blog-decluttering project. (This past week I also unearthed two more forgotten “How Normal People Eat” interviews, with the thoughtful and delightful Rachel Blakeman as well as my surprisingly cooperative brother-in-law, Gunnar Heller. )