My niece Kyla frosts a cookie with the help of her dad, my brother Brent.

When I asked my dad what it was like physically handling large amounts of cash as a banker – decades ago he would actually ride a bike down to the post office to pick up an $80,000 shipment from the Federal Reserve – he said it was just part of the job, something you got used to.

“After awhile, it’s just like you’re handling tires or something,” he told me.

This was the mindset I decided to adopt yesterday when we were decorating Christmas cookies at my parents’ house. If somebody who grew up without much money could learn to handle bundles of $20 bills without stuffing some in his pocket, couldn’t a recovering sugar addict learn to spread icing on cookies without stuffing a bunch of them in her mouth?

See, plain old “willpower” doesn’t work for me. I always need a storyline in my head, some kind of challenge that makes the effort involved more interesting. As a secondary insurance measure, I decided to make it an Atkins day so I would be focused on a much more limited food universe.  The combination worked. I didn’t eat a single cookie or or a single drop of frosting.

Was it worth it, considering I still managed to consume more calories than I likely burned on a day when I only jogged 1 mile to fulfill the holiday run streak quota? I think so. I like the idea of deciding when and where I’m going to indulge during the holiday season, and not just go careening from one temptation to another.

I also think that the less sugar I eat, the less tempting it is. None of this necessarily helps me lose weight, as I still eat too much way too often. But these small victories nonetheless feel like progress toward healthier eating. 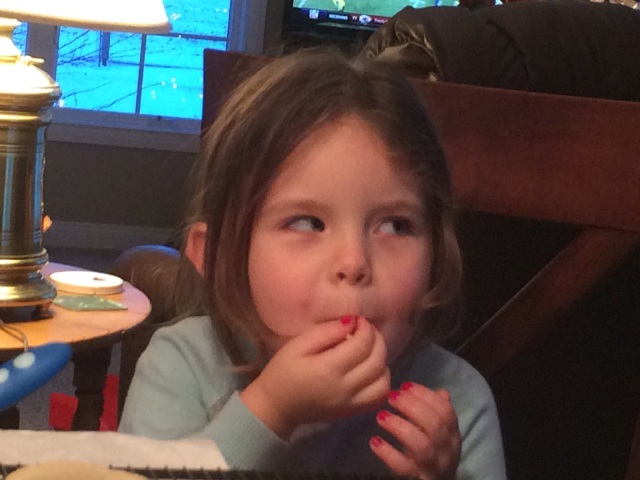 Here’s the damage report for Sunday:

Breakfast: Large salad with 4 boiled eggs, a can of tuna and ranch dressing.

Dinner at my folks’ house: A little salad and the toppings off two slices of meatlover’s pizza. (No crust).

On Saturday I was thinking I could maybe get away with 2,000 calories because Traci and I ran 8 miles or so. Unfortunately I went over that, at 2,190: