Posted on February 8, 2016 by tischcaylor

The Chilly Chili Run was an awesome venue for a recovery run after Friday’s 20-miler. Conditions were perfect — sunny and cold but hardly any wind, with crispy mud and just a bit of ice on the trails at Ouabache State Park. And since it was an untimed just-for-fun event, I could just go out and unkink my muscles without feeling mortified about my time.

Not that there wasn’t a bit of awkwardness involved. I’d arranged to interview a runner who’s somewhat of a local legend afterward, and it was rather humiliating to admit to a 2:33 marathoner that it took me four hours to run my 20 the previous day.

Here’s the surprising thing, though. As good as Doug Sundling was at his peak — winning a boatload of area races ranging from 5Ks to marathons and every distance in between over a  period of more than 20 years — it turns out he wasn’t much good in high school.

“I couldn’t crack the varsity, not even as a senior,” he told me Saturday. “I was a late bloomer. I didn’t break 10 minutes in the 2-mile until I was 30 years old.” 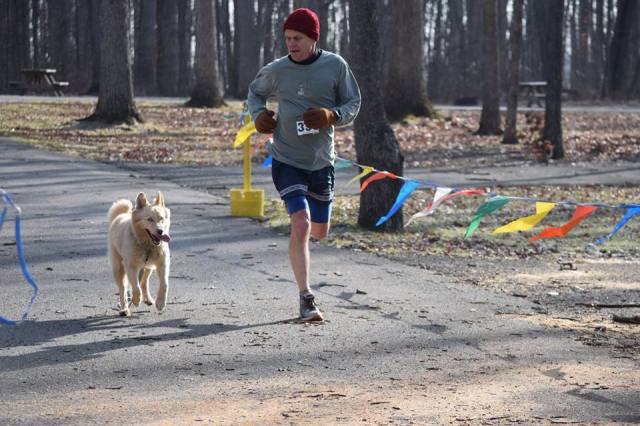 Doug Sundling and his dog Ginger at the Chilly Chili Run.

That doesn’t give me any cause to hope I’m going to suddenly get faster at age 51. But I think it’s a cool thing about the sport itself, that there’s so much room for improvement, so much payoff for being smart and dedicated. And, judging from Sundling’s case, so much reason to keep at it, even after you’ve stopped training to win.

I’ll run more from this series of interviews after I’ve pulled the article together. In the meantime, here’s how the rest of this week’s training went, with two weeks left until the Maple Leaf Marathon at Goshen College:

Monday — Fired up from the Scott Jurek Fun Run the day before, I went out to run a 6-miler on the Greenway and … struggled. So it goes, as my favorite Hoosier novelist would say.

Tuesday — Felt sick. Gave myself permission to take a day off, figuring I’d rest up and then do a grueling Yasso 800s workout the next day. But then I got a text from my sister wanting to run on Wednesday, and since we hadn’t run together in a while I said I would. Which meant I needed to do my speed workout Tuesday night.

I dream of someday running a 4:30 marathon. Even though I know it’s not going to happen two weeks from now, I figured I might as well get started on “someday” now, especially since I did not feel like doing another timed-run workout this week.

The Runner’s World writer said he usually starts with four 800s at his goal pace, and then builds up to the point where he can do 10. I decided to do four 800s at 4:37 (6.5 mph), then force myself to do six more of a shorter duration but at the same pace. (It seems like it might be easier for me to add a few seconds to each pre-existing interval rather than adding extra intervals in future workouts.)

So here’s what I did:

(Yes, I also need to build up to jogging the recovery period. Duly noted.) Total: 6 miles

Wednesday: I figured Traci would want to go for an easy 4-mile jog. But no. Naturally she wanted to do intervals instead. We did 3 mile’s worth on the half-mile loop at the Ouabache State Park campground before my left hip began to tighten up, so we called it a day. (In terms of running, that is. Colleen and I also went to yoga that night, followed by a cross-fit style workout with Traci that I could barely do, my arms and shoulders were so spent from yoga.)

Thursday: Rest day before long run; did a kettlebell workout and took Loki for a walk.

This was our one-month scale check for Wells Weighs In. I was disappointed to have only lost 3.5 pounds — I’d been hoping for twice that amount — but at least it was better than nothing. (My sister, for example, lost a mere two-tenths of a pound thanks to too much lasagna the night before. Which led me to congratulate my brother Brent for his 2.2-pound loss, “Way to go — you lost more than 10 times as much as Traci!”) ) For the record, my dad lost 9 pounds, Colleen lost 3.5 pounds, Rowan lost 10 pounds and Ben lost 8.5 pounds. (His four-person team, the NHS Weight Lifters, lost a total of 37 pounds, which may be enough to put them in first place with three months to go and a $1,200 prize at stake.)

Friday: 160-lap 20-miler at the Jorgensen YMCA. This time I started out running two laps, then walking one, after noting that’s what one marathoner who beat me two years ago did. Surprisingly, it didn’t seem to hurt my time any.

As I came up on the 1-hour mark I happened to notice I was 40 laps in, which put me at 5 miles per hour or a 12-minute pace. If I could sustain this it would lop some time over my previous marathon, so from that point on I made sure I got in 40 laps every hour. And that led to making sure I got in 20 laps every half hour, and then 10 laps every 15 minutes.

Sounds maddening, I know, and in past long runs I’ve fumed over my tendency to pay attention to the clock rather than just letting a long slow run happen without any time pressures. The thing is, though, this proved to be a really effective way of staying in the “now” — playing a micro game within the larger game — which was something ultramarathoner Scott Jurek had talked about last weekend at the FWTC banquet. I was so into these mini games, in fact, that I never got around to listening to a book my husband had just downloaded for me that morning. Complete radio silence for four hours, other than the ambient gym noise going on around me.

Afterward I texted my dad that it had occurred to me that I was so dialed in it might’ve been nice to just go ahead and run the marathon and get it out of the way. “You must’ve felt pretty good,” he texted back.

That wasn’t it, though. It’s not that I was feeling so great; there were some nagging physical issues to overcome. But I was definitely in “let’s do this” mode, and you can’t always predict when your mind is going to work the way you want it to.

One other small success from this run: I was able to shift gears on my run/walk pattern without getting tripped up, moving from 2 laps/1 to 3 laps/1 as needed and then jogging several laps in a row at one point to make sure I got my hour lap quota.

Saturday: As noted above, did the 3-mile loop of the Chilly Chili Run as a recovery run. (Also: 4 x 15 kettlebell swings)

Sunday:  4-mile jog around the neighborhood + another crossfit-style workout with Colleen and Traci during halftime of the Super Bowl.