Posted on February 2, 2016 by tischcaylor

On the one hand, based on last week’s 18-miler, I do feel like I ought to be able to finish the Maple Leaf Marathon on Feb. 20. But I hate the way I’m fretting over how long these long runs are taking. I thought switching to a run/walk pattern would help me cut some time over my first attempt at this race (5:35), but I now think that’s unlikely.  For one thing, I can’t seem to find a pattern that I’m entirely comfortable with. But I also need to realize I’m just not in as good of shape as I was two years ago. I started out about 10 pounds heavier, and though I’ve gotten rid of a couple of those it’s been an extremely slow, tough process. (The increase in my calorie burn has a hard time keeping pace with my increase in appetite!)

I do like the way that running 4 laps, then walking one helps me mentally leapfrog through the laps as if I were counting by fives. But I think it might be faster to try another method. So do I keep experimenting with not much time left to make changes, or go with the method that most seems to help my sanity?

I think I’m going to have to make peace with just finishing this marathon in whatever time I get and then try to do better next fall, when the marathon distance returns to Fort Wayne with the Fort4Fitness Race expansion in October.

Monday — This was my second time doing a timed-run workout. Bumped my speed up from 6 mph to 6.3 mph on the first set of timed runs of 9 minutes, 8 minutes and 7 minutes, and cut my recovery break walks down to 1 minute each throughout. Though I stuck with the same speed as before on the 6-5-4 minute runs (6.5 mph) and the 3-2-1 minute runs (6.7 mph), this workout was MUCH harder due to the shorter breaks. Cutting out all that walking cut 17 minutes off the workout, but I also went 1 mile less — 6 miles instead of 7, including a warmup and cooldown.

Tuesday — Jogged seven miles (56 laps) on indoor track at Jorgensen YMCA, basically getting in as long a run as I could while my son did a weights workout. Felt good to get in the flow of simply running without worrying about run/walk patterns.

Wednesday — Seven-mile treadmill run using a pattern of 6.0 mph for 4 minutes followed by 4 mph walk for 1 minute. (Started out trying a 6.3 mph pace, but didn’t feel I could sustain it for the whole run.) This doesn’t seem like it should’ve been hard, but it was — possibly because I did this in the morning just 12 hours after the previous night’s 7 miler.

Saturday — Rowan and I took her husky Loki on a 2-mile hike on a private trail belonging to a local runner, Doug Sundling, who runs and bikes with his dog Ginger. Ginger was all laid back because Doug had taken her out on a 16-mile run while he biked that morning. But Loki was an overexcited, untrained nutbar. Both dogs had fun on this hike, but we wound up not letting them socialize much. Otherwise, I was pretty busy with writing projects — so much so that I forgot all about the strength workout I’d planned.

Sunday — 4-mile fun run with Scott Jurek and the Fort Wayne Track Club (now the Fort Wayne Running Club) on the campus of Indiana-Purdue Fort Wayne. I was all distracted because I was worrying about getting pictures of Jurek for my newspaper column, but I couldn’t resist jumping in and going on this run. Jurek told the crowd of maybe 75 runners that he’d start out at the front of the pack and then work his way back. In reality how this worked out, at least for me, is that he came out to greet me 20-30 feet from the finish and ran with me from there. Every time he’d escort someone or a group of people to the finish, then he’d jog back til he got to the next runner. It probably would’ve been better, in retrospect, if I’d left a bigger gap between myself and the runner ahead of me. But it was still cool to run even a few feet with such an amazing athlete and a genuinely nice guy. 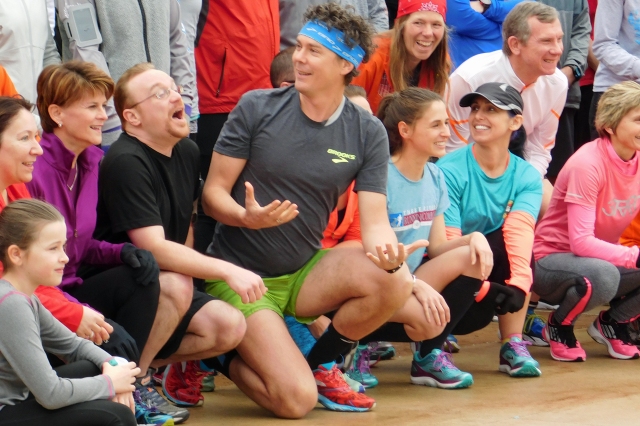 Ultramarathoning legend Scott Jurek jokes with the crowd during a group photo before the fun run. Here’s one thing we have in common: We’re both about 10 pounds over where we’d like to be. But Jurek, who’s writing a book about setting an Appalachian Trail speed record last summer, told us he’s taking a break from serious training right now.