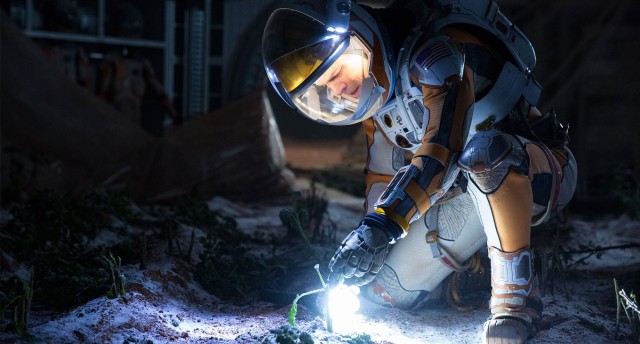 In a scene from the movie “The Martian,” Matt Damon’s stranded astronaut discovers bad news about his potato crop.

Technically, the Martian Potato Diet was a failure. After four days of eating nothing but potatoes, I lost 1.8 pounds – not enough to meet my 3-pound goal for a Chocolate Peanut Plus shake at Ivanhoe’s on Saturday night.

Of course, after eating nothing but potatoes for four days, the silver lining was that even something as simple as an apple tasted indescribably delicious.

I should note that before I switched to the potato diet, I’d dropped about 5 pounds over the previous seven days or so following the Slow Carb Diet. So it was probably a weird switch for my body to make, going from low carbs to nothing but carbs, and it wasn’t really a fair starting point for testing out a new diet.

Also, I should note that when I say the potato diet was a failure, what I’m really saying is that usually, given four days to lose 3 pounds, that’s a goal I’m going to nail – even if it means fasting on the last day to get the right number on the scale. That’s not true weight loss, it’s hitting a certain number by a deadline. In this case, my curiosity about the potato diet overrode my usual deadline fixation, and so I didn’t fast or do anything out of the ordinary on the final day to “make weight.” I didn’t even run, as that was my “rest day.”

That being said, this was a pretty interesting experience. I didn’t feel any energy loss over those four days like I often do when I’m really cutting calories or carbs. Hunger was never a problem; potatoes are obviously pretty filling.

I didn’t get completely sick of them until Day 4. And that in itself was pretty interesting because it was a great “hunger reality check” as I was making food for Colleen’s birthday party sleepover. Every time I  got the urge to try “just a taste” of this or that, I’d tell myself: “If you’re hungry, eat a potato.” Obviously I wasn’t hungry, my taste buds were just feeling whiny.

I did not ration the potatoes, consuming about 8-12 per day. These weren’t the big bakers, just the ordinary ones that come out of a 10-pound bag, about 100 calories each with no fat. I guess if I wanted to follow the movie circumstances more closely, I should’ve rationed my potatoes more. But I doubted my ability to stick to a diet if I didn’t give myself one “out,” that being that I could eat as much as I wanted.

At first I allowed myself ketchup with one “potato meal” per day, given that Matt Damon’s stranded astronaut in “The Martian” had access to ketchup, at least for a while. But then the last two days I switched to having butter with one potato meal instead. I was generous with the butter and didn’t measure it, so maybe I got too many calories there. Also, on the last day I allowed myself two 4-ounce glasses of red wine. Otherwise, I didn’t consumer any calories from beverages during the diet.

This isn’t a diet I’m going to turn to for a quick weight loss. But I’m intrigued enough that I might do it for a day or two every once in a while just to free my mind up from making food decisions. (It’s also one of the cheapest diets you could possibly go on, considering I went through about two bags of potatoes that I got on sale for $2 each.)

Like Loading...
This entry was posted in Uncategorized and tagged dieting, diets, Ivanhoe's, potato diet, The Martian, weight loss. Bookmark the permalink.