Last Saturday at the Wildcat Invitational I finally broke the 25-minute mark, lowering my PR by more than 2 1/2 minutes!

Approaching the finish at Van Hoozen Park near Homestead on Wednesday night.

Right as soon as I was done, Rachel and I had to leave the Indiana Wesleyan campus in Marion to make it to our soccer game back in Ossian. The cool thing is, we won both the meet and the soccer game! We are undefeated in soccer and our cross country team is doing really well, too. We have won our last three meets and placed second at the Manchester Invitational.

I’m glad we won Wednesday’s meet against Summit and Woodside, but it was not a good race for me.  Instead of the regular course, they had to make a completely new one because it was so wet. This new one was just three laps around a big field. Also it was really disorganized. Nobody knew what place they got (except Sydney, was was first, and me, since I was last). I still don’t even know what my time was, since I didn’t see a clock, but I don’t think I did very well.

It was also super muddy. My shoes have never had to endure such a bombardment of mud! But in some ways it was good because it made me tougher and more adaptable. 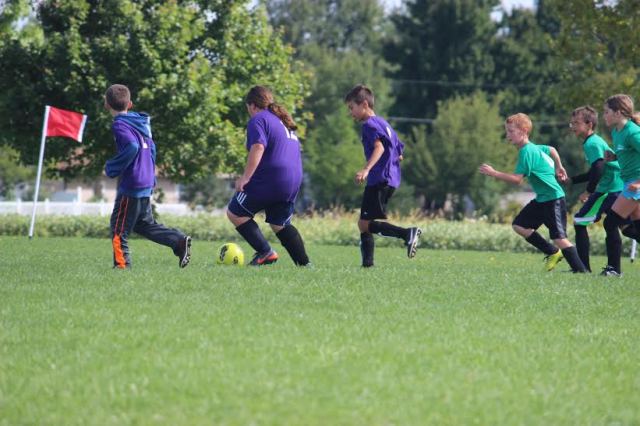 Here I am playing soccer last Saturday after our cross country meet in Marion.

Like Loading...
This entry was posted in Uncategorized and tagged cross country, middle school sports, soccer. Bookmark the permalink.