Reflections on a run: Seeing patterns in life and death

I was planning to visit the funeral home last night to pay my respects to Uncle Hubert, but I’d left my keys in Rowan’s van and they rode back to Manchester University with her. Bob drove over after work to retrieve them, but by then calling hours were over. I went for a run instead, which led to the following meditation:

Underlying that pattern is another: Tractors.  Oliver, John Deere, Farmall.

A dark green Oliver in the flower arrangement on Uncle Dan’s casket.

A bright green  John Deere for new nephew Kobi, a baby gift from his boy cousins, who wanted to be the ones to give him his “first tractor.” 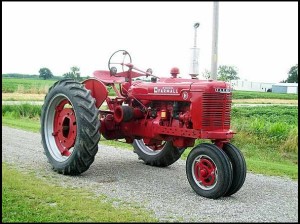 A 1944 model H Farmall tractor like the one that was Hubert’s pride and joy.

And a classic red Farmall in the last conversation Dad had with Uncle Hubert, who called one day last week to tell him that the “H”   – the model of tractor that was delivered to the Isch homestead when Hubert was 15 – had just turned 70.

Patterns fascinate me. Recognizing eating patterns, and then deconstructing them, was a big part of my 90-pound weight loss back in 2010. I’m not sure what this one means, other than birth and death form the bass beat of life for a large family in a small town. That, and a reminder that my agrarian roots run deeper than I sometimes realize.

The arrival of the “H” must’ve loomed large in Hubert’s 15-year-old eyes back in 1944. Dad can’t remember if it was the family’s first tractor or not. His dad, Hubert’s oldest brother and the first of the 11 children of Joe and Minnie Isch, farmed with horses the first couple of years after he was married in 1939. But either way, a new tractor would’ve been a big deal to a teenage farm boy during World War II.

Hubert served in Korea from 1951 to 1953, then came back home to the family farm, finally taking over the home place when he married Aunt Judy, when he was nearly 41, in 1969. He was still farming two summers ago when he went to Indianapolis for a ceremony honoring the farm as a Hoosier Homestead, and celebrated by inviting his surviving siblings and all their descendants to the home place for ice cream and a hay ride pulled by his beloved “H.”

That’s a great memory, and I hope to hear more at the funeral. I can’t get enough old family stories, and I never get tired of finding patterns in our everyday existence. 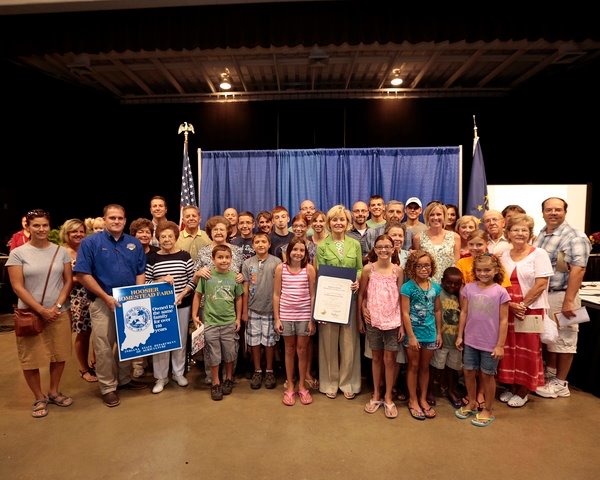 Lt. Gov. Becky Skillman poses with a few dozen members of the Isch family at a 2012 Hoosier Homestead ceremony. Hubert is at Skillman’s 2’o’clock.