Salmon burgers (minus the spinal columns)

This is the first batch, devoid of silvery fish skin and spinal columns after I laboriously picked out all the gross stuff. (I didn’t share that information with my test eaters, and they loved them.)

Who knew canned salmon was so disgusting? Apparently the typical processing method is to just toss the entire fish into a wood chipper. By the time I dug out the copious amounts of silver skin and what appeared to be spinal columns, about 1/3 of the can was gone.

Look for the words “skinless or boneless” if you are easily freaked out by fish innards.

But the burgers themselves, made from a simplification of a Runner’s World recipe I saw  a while back, were a hit. Further investigation was required. And it turns out you can buy skinless, boneless salmon both in pouch form and in smaller tuna-sized cans. It was flakier and less mushy than the pureed fish guts. Though for some reason the second batch didn’t cook up as “burger-like” and had a tendency to fall apart. Still tasty, though.

Anyway, here’s what we used: 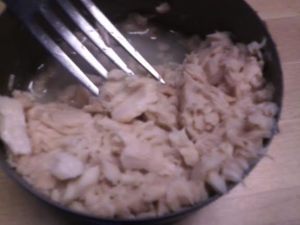 The skinless, boneless fish meat looked a lot like tuna.

About 12 ounces of canned salmon — about 2/3 of the 15-ounce can of “fish guts” we used the first time, and 2 6-ounce cans of skinless, boneless salmon the second time

In both cases, I just whisked the mixture with a fork, sprayed a pan with cooking spray, and fried the burgers. 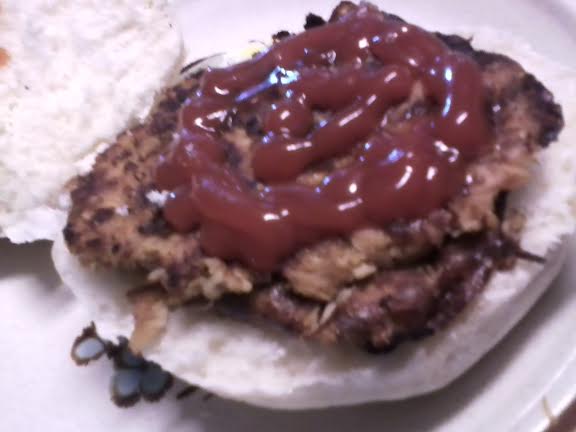 The second batch tasted just as good, but didn’t hold together as well.

3 Responses to Salmon burgers (minus the spinal columns)