Look what showed up in the produce bin this week! Naturally, I had to make these guys into brownies…

My sister and I guzzled beet juice before our first mini-marathon after reading a study suggesting the  foul-tasting beverage increases endurance. (One ultramarathoner claimed he ran an extra 8 miles in a 24-hour race.) I don’t know if the beet juice helped us or not, but I do remember feeling surprisingly perky in the latter stages of that 2011 race.

MUCH better than beet juice!

Colleen’s been reminding me to pick up some beet juice before the Maple Leaf Indoor Marathon, but I figured I’d make these Red Velvet “beet” brownies (from the January issue of Runner’s World) instead. I was going to use canned beets – until these beauties showed up in this week’s produce bin from Green Bean Delivery.

It is startling how intense the color and pattern of a real red beet looks, especially if you’re used to seeing the mushy stuff that comes in a can. There must be something vital lurking in there, right? I guess it’s those nitrates.

Is that psychedelic or what? Sorry for the crappy cell phone pic, but Bob had gone to bed…

I can’t see these were the best brownies I’ve ever had. Ours were a bit dry – maybe because we didn’t have unsweetened baking chocolate and subbed in a cocoa/coconut oil combination instead. Still, they were definitely edible and chocolatey. Way better than beet juice.

You can find the original recipe, which uses quinoa flour, here. We didn’t have any of that on hand, either. Here’s how we made ours:

½ pound beet chunks, microwaved until tender and pureed in a blender 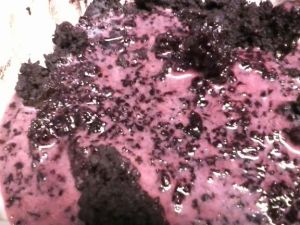 When we poured the beet puree into the chocolate, it looked like raspberry sauce….