Holy crap! I’ve been accepted into the Maple Leaf Marathon – just 6 weeks away! 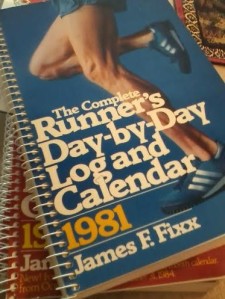 According to Dad’s old running log, he didn’t go on any runs longer than 10 miles the summer of his last marathon, yet he turned in his best performance..

This is an indoor race at Goshen College on Feb. 22 and 23 – 204 laps around a 208-meter track, with runners changing direction every half hour. Because it’s a small space, they only take 30 runners each for Saturday’s and Sunday’s race. Though the deadline isn’t until the end of January, when I checked at the beginning of the month both races were full. I wrote to the race director to ask about a waiting list, and now I’m in!

The good news is, I’ll get to tackle my primary 2014 running goal really soon. The bad news is … I’m going to have to really scramble to get ready for this!

The only thing that’s keeping me from falling into a perpetual panic attack right now is my love of deadlines. They help give shape to my life, making me tackle things I’d otherwise put off into infinity. After decades of deadline pressure, both in journalism and in life, I know that it’s really amazing what you can do in a short time frame. I know there will be bouts of nerves along the way, but I’m used to that noise. Bring it on!

Ok, confession time: That’s actually a big load of false bravado. What REALLY makes me feel better about this project is a conversation I had with my dad during last week’s arctic pilgrimage to O’Hare.  I was telling him about my attempt to get on the waiting list, and how I was secretly nervous about getting accepted because while I’ve been running regularly for a long time I haven’t done much long-distance running in the past year, other than a 50-mile run/walk in early November. (And I should say walk/run because my sister* and I only ran about a third of it.)

That’s when Dad told me that of his three marathons (1979-81), he actually turned in his best performance on the one he didn’t even train for — that he and his running buddy Jack did just for fun.

“We didn’t even intend to run the whole thing,” Dad said. “We thought we’d go 10 miles or so. But we felt pretty good, and so we just kept going and going.”

Their previous two marathons had taken a little over 4 hours. This race, in 1981, was faster, though he doesn’t have a time listed in his 1981 running log he dug out over the weekend. “Could have broke 4 hours easy”  he wrote, but he stayed with Jack, who “hit the wall” at the 23-mile mark.

Looking back, Dad thinks that race went well for him because he he was so relaxed. But another huge factor was that they had the mental experience of their previous marathons to draw on. It’s like they say: Being able to run the race in your mind is always the most important thing.

This is my first marathon. But I’ve completed that distance before — within the 6-hour time limit the Maple Leaf race requires – during our 50-mile run/walk. I want to run this marathon start to finish if I possibly can. But based on our previous experience, I think  I’m capable of walking part of it and still making deadline.  That gives me an underlying confidence I need to draw on now, whenever my nerves flare up during this short training window, as well as during the race itself.

Thanks, Dad – for inspiring me to try running as a kid, and for continuing to inspire me now. (And Happy Birthday, by the way!) 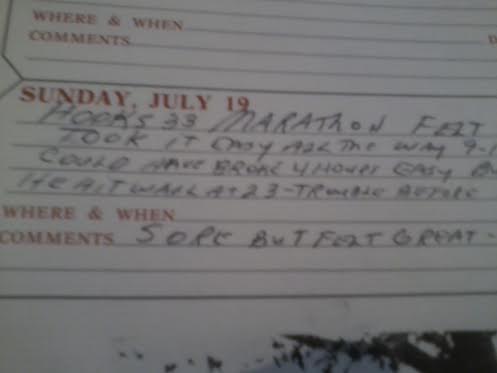 A page from Dad’s 1981 running log showing his brief report on the Hooks/TV 33 marathon in Fort Wayne.

*I asked Traci if she wanted to do this and she actually gave it a bit of thought, even though she hasn’t been running much lately. I don’t doubt she’d will herself through it, but she usually takes some time off from running this time of year and focuses on swimming.

Like Loading...
This entry was posted in running, Uncategorized and tagged iindoor marathon, marathon, running, training. Bookmark the permalink.