A kid’s point of view: The Galloping Gobbler 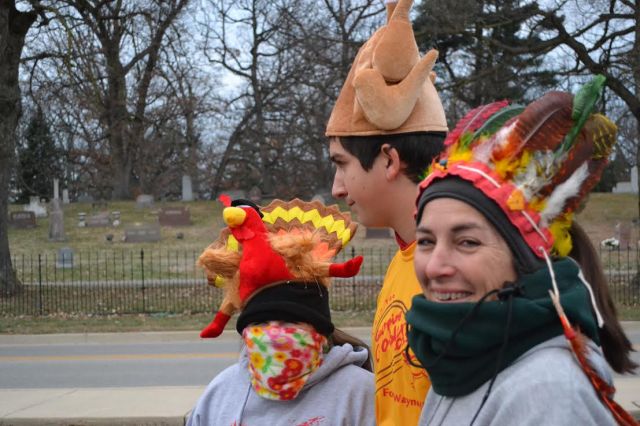 My turkey hat was SO much cooler than Ben’s!

On Thanksgiving me and Mom and Ben ran the Galloping Gobbler. “Oh, it’s so fun!” they said. Well, Mom and Ben are not the most reliable source when choosing “fun” races.

It was freezing cold, for one thing! Then the race started late for some reason, and we had to stand there for half an hour, getting colder and colder. By the time it finally started, my feet were numb and my legs were all tight. This is how cold it was: When we got to the aid station, I grabbed a cup of water and the bottom part of it had turned to ice!

The other thing they DID NOT tell me was how hilly it was. Everywhere you were there was always another hill coming up within 20 yards. This race was SO hard! I tried to run as much as I could but I had to walk more than I wanted to. Mom said it was OK, we were just out to have fun, but I was NOT having fun.

Well … maybe it was kind of fun. It was fun to see all the costumes. And the real live turkeys. And some of the tombstones in the cemetery we ran through were kind of interesting. And then when we went to Jeff and Chalice’s later for Thanksgiving, it turned out that this girl who was there had been in the race, too, and she was one of the people we saw wearing a turkey tutu!

Ben said the announcer at the race said 1 percent of the population of Fort Wayne was there yesterday. (Mom and I couldn’t hear what he said where we were far back at the start.)  So that was another thing that was kind of fun: It kind of felt like “the anthill” from “World War Z” at the start! 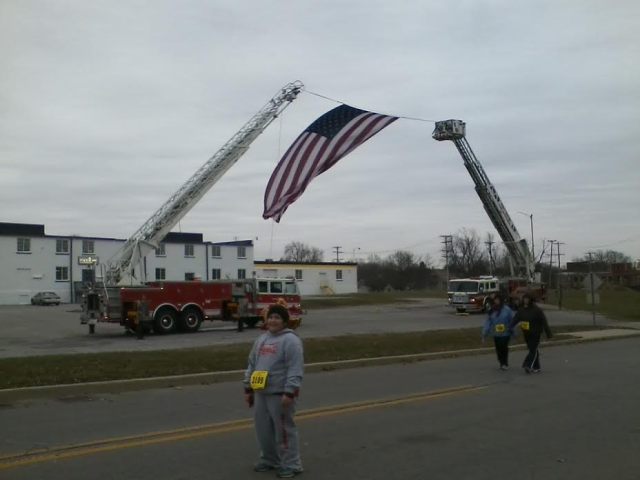 I thought it was cool that these firetrucks displayed this huge flag near the end. But wow, was I tired (and cold!) by this point in the race!

7 Responses to A kid’s point of view: The Galloping Gobbler