Time to embrace a run/walk philosophy?

I used to think walking on a run amounted to giving up. But this year I’ve done a lot of walking on purpose. So am I better off — or worse? 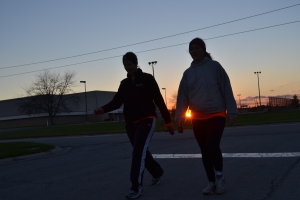 I’ve been doing more walking this year than ever before, including at this juncture in our DIY ultramarathon.

— In warmer weather, I’d sometimes meet my sister for a walk on days she babysat for my niece, because the only stroller she had access to wasn’t well suited for jogging. We walked pretty fast,  around 13 minutes a mile. Afterward, my legs would yelp, way more than after any run. Yes, I was using my muscles in a different way. But I was also working them, and working them hard.

— We built walks into our speed-work sessions, which enabled us to go faster on intervals of anywhere from 100 meters to half a mile, sometimes up hills. This lowered our pace under 10 minutes a mile for the first time.

— When we began adding distance this fall, we planned some walking stints into our 10-mile runs, knowing we’d have to do a lot of walking anyway during our 90-miler (which turned out to be a 50-miler instead). I knew Traci would like this much better, since her joint pain makes her wary of distance running. But I wound up enjoying it more than I expected — especially once we realized we could run/walk 10 miles in the same amount of time it once took us to run the whole thing.

— Finally, our DIY ultramarathon earlier this month would never have happened if we hadn’t added walking into the mix. Before volunteering at the Indiana Trail 100 this year, I assumed that 50- and 100-mile races were events in which people ran the whole way. And some do. Maybe even the majority; I can’t really say. But from talking to a couple of people who’ve participated in these events, and doing some reading pegged toward beginners, it’s clear that the most important thing is “relentless forward motion.“ Meaning, keep going at all costs, even if you’ve got to walk for a while.

I mentioned in an earlier post that our 50-mile time would’ve placed us 897th out of 967 finishers at last year’s JFK 50-mile run in Boonsboro, Md., (a race I picked at random, looking at those run on pavement rather than trails). It also would’ve had us finishing well under the 15-hour limit for 50-mile participants at the Indiana Trail 100.

So what does that mean? That more run/walkers have infiltrated ultra marathons in the same way that they’ve swelled the attendance at 5Ks? Maybe so. Is that a bad thing? Who am I to say?

My personal feeling is that if I do a marathon next year, I’d like to run the whole thing. Yet if I could get Traci to do one with me by agreeing to run/walk — especially if we had a shot at finishing in 5 hours or so (a 12-minute pace would get you done in about 5.2 hours) — maybe I would.

So have I gone over to the dark side? Have I embraced walking, or do I merely tolerate it, knowing it might get me to some goals faster?

I still don’t know the answer to that one, but it will be interesting to see where this goes from here.

4 Responses to Time to embrace a run/walk philosophy?