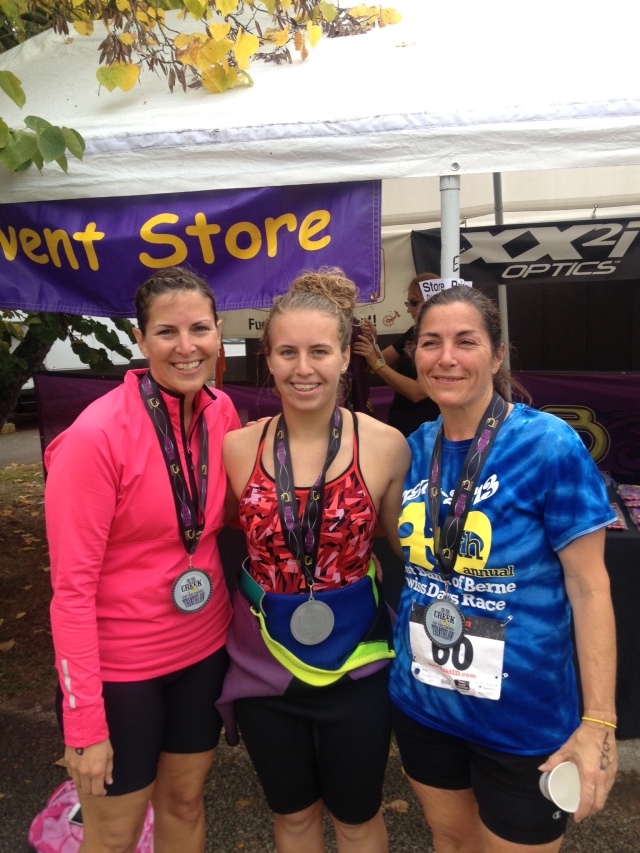 Who would’ve guessed we’d get first place in the sprint relay?

“I’m not going!” my 14-year-old niece told her mom at 4:30 a.m. Sunday, when Traci woke her for our team triathlon at Potato Creek State Park. “You can swim!”

Madison dons her wet suit, slightly less grumpy after having napped on the drive.

A few hours later, Madison was standing neck deep in 68-degree water, adorned in a wet suit. As a relay member, she had to start with the guys. But it wasn’t long before she started passing a bunch of them.

We’d told ourselves there was nothing at stake for this triathlon. No pressure, just a chance to introduce Madison to the sport. But when she came out of the water in 10:50, we were psyched. Traci took the timing bracelet and pedaled off on Ben’s bike. We figured she’d be out on the course 40 minutes or so, but she got back in 36:19.

“I think I’m gonna die!” she gasped as I took the timing bracelet off her ankle, wrapped it around my own, and headed off toward the trail by the beach.

I grab the timing bracelet off Traci’s ankle while she gasps for breath after a PR in the cycling event.

My lungs were burning by the time I got to the woods. “Calm down!” I told myself. “Control your breathing!” Yes, the first two members of our relay had gotten us off to a fantastic start, and I didn’t want to let them down. But I didn’t want to go out too fast, either. Ahead of me, I saw a guy just loping along, keeping a pace just slightly faster than mine without much effort. I tucked in behind him and held on for dear life, trying not to think too much and just run.

The mud wasn’t as bad as I feared it would be after an all-night rain, but the hills were tough. At one point another runner passed me and I was tempted to tuck in behind her and let my pacer go ahead. “Don’t do it!” I thought. I knew if I made the effort right then to stay with my original guy, I’d probably adapt eventually – but if I fell back into a slower pace I might not recover.

I didn’t have much left when we emerged from the woods, but neither did my pacer. I just focused on staying right behind him, and suddenly we were past the finish line.  “Wow!” said Traci, “you did great! We all did! I think we might have done really well here today!”

Because we were in the last group to start, we had to subtract nearly 30 minutes off the official finish line clock.

Sure enough, we wound up placing first in the sprint relay division with a time of 1:18:57. I was disappointed in my time (30:08, a 9:42 pace), but it was my best time on a trail run by far, especially one involving mud and hills. Traci’s bike time was a definite PR – 9 minutes faster than her time last year. Madison was disappointed in her swim time, but Traci and I couldn’t help being impressed. She hadn’t even been in the water in two months, but her time was not only several minutes faster than what ours would’ve been, but faster than quite a few of the guys who started in her wave.

We didn’t have time to stick around for the awards ceremony, as we had to get back for our cousin Heather’s bridal shower at Mom’s house. But we had a blast, it was great to give our best effort, and the fact that we won* was just icing on the cake.

Madison, center, comes out of the water in the middle of the pack of male sprint triathletes. (Relay entrants started with the male sprint group.)

*Madison and Traci don’t want me to reveal how many teams there were, so let me just say this: We did beat some people. And we’ll leave it at that.

Like Loading...
This entry was posted in triathlon, Uncategorized and tagged sprint relay, triathlon. Bookmark the permalink.