At age 70, Grandpa sets a record 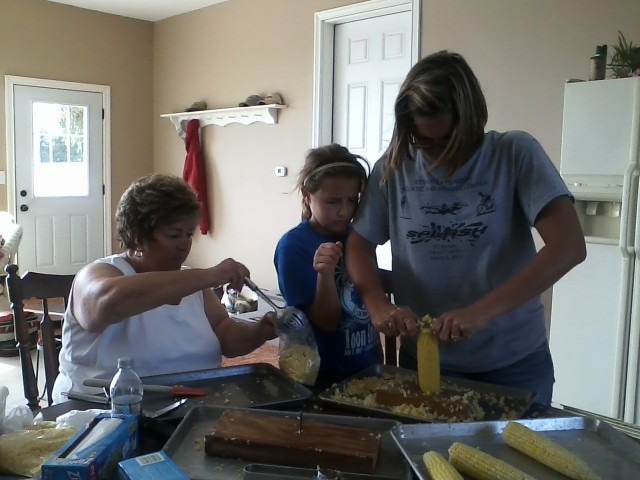 Grandma, Monroe and Traci freezing sweet corn. It was funny how many of us were wearing race shirts during this process. Traci and Colleen both showed up in their Manchester Triathlon shirts, while Monroe and Ben both wore Loon Lake 5K shirts. I think I wore a race shirt, too, but I can’t remember which one.

Despite eating a record seven ears of sweet corn when we got together at Mom and Dad’s Saturday night to freeze corn and can green beans, Grandpa reports that he still managed a slight loss in his Sunday morning weigh-in. 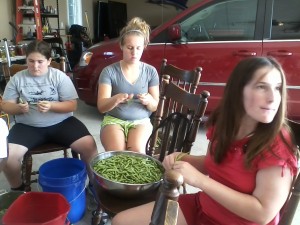 With one week to go, he’s in third place in the family weight-loss contest with 3 pounds lost. Ben’s in second place with 4.0 pounds lost and Colleen’s in the lead at 4.8 pounds.

Uncle Brent, who’s not in the contest but provided the corn in his role as apprentice farmer to Uncle Dan, came in a close second by consuming six ears of corn.

A cool thing about our meal Saturday night was how many components came straight from the communal garden at my parents’ house  — and that didn’t even include the green beans we were working on. Besides the corn, we had home-canned salsa and dill pickles, plus fresh tomatoes and onions for the grilled burgers. 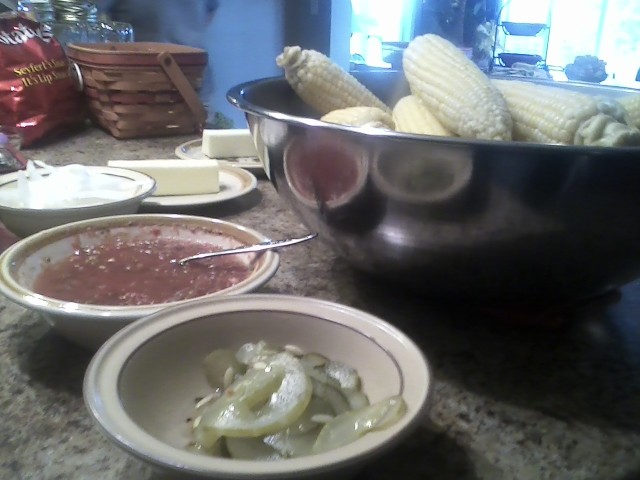 We served 40 ears of corn for our family’s dinner Saturday night, along with home-canned salsa, left, and home-canned dill pickles, center.

Traci and I somehow managed to sneak in a run during this whole process — running intervals down the gravel road in the 25 minutes while we waited for the second-to-last batch of beans to process in the pressure canner.

The question is, did we get a better workout than the kids, who spent a big chunk of the evening playing an old-fashioned game of roundtown kickball?

2 Responses to At age 70, Grandpa sets a record