My friend Sarah and I with our Iron Kid medals.

OK, so you are probably wondering why I am writing on a Tuesday. Well, the Iron Kid Triathlon was Saturday.  That’s a triathlon for kids. You start out swimming 50 meters in the Wells Community Pool, then you bike 1 mile in town, then there is a .65 mile run in the back of the 4-H park.

I was pleased with my time this year, which was 18:30, considering last year my bike broke so I had to push it while jogging the bike course and THEN run the run course, too!

Most things were more fun this year, but the weather didn’t really cooperate. We were supposed to start at 7:45, but thunderstorms delayed the start to about 10:30. Some kids went home and then there weren’t enough volunteers so some kids cut across on the run because they didn’t know where they were supposed to go. But still, it was super fun!

The swim isn’t my favorite part, but it went OK. I wasn’t the last one out of the pool. I wasn’t as worried about the transition this year because I knew what to do. I wore compression shorts over my swim suit so afterward all I had to do was put on my shoes and socks, shirt and helmet. (My big sister Rowan and Grandpa helped me because Mom had to work.)

The bike ride went really fast and it was easy, especially compared to last year! I was also on a bigger, better bike: a 26-inch cruiser. When I rode into the park toward the bike transition I saw Jessica, the reporter from The News-Banner who interviewed me on Friday about the race. I gave her a big cheesy smile and she took my picture. I was kind of embarrassed when I saw it right on the front page yesterday, though. (See below).

As for the run, it was harder than the bike but it was a lot easier than last year. I knew that if I could finish last year I could finish this year. Also, having done some 5Ks made this seem shorter.

Another fun thing was meeting up with my friend Sarah, who I haven’t seen since school. She’s a champion swimmer and we got to catch up during the rain delays in the locker room. She did really good. She got first place in our age group. 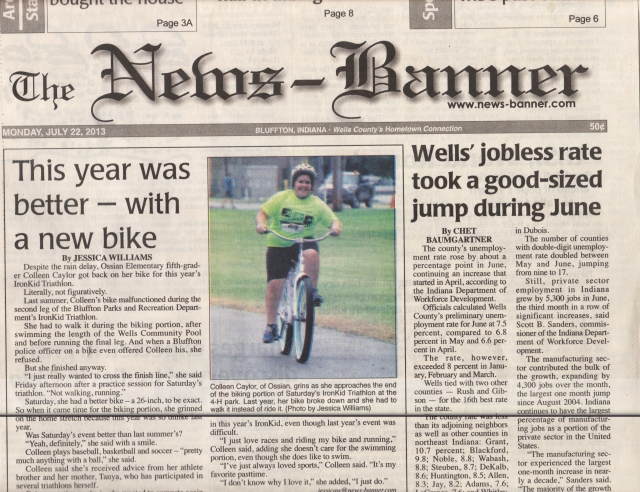