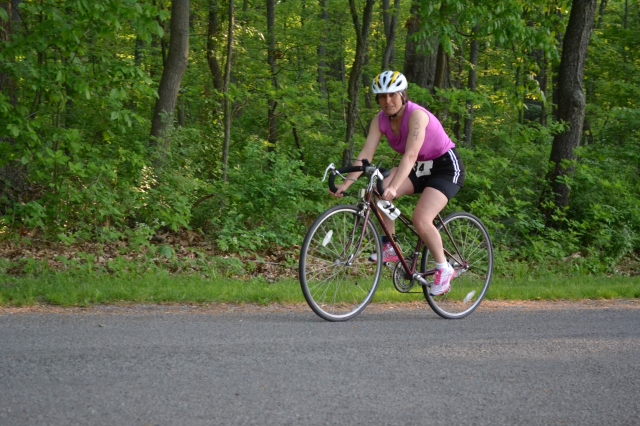 I can’t believe how much fun I had during the cycling portion of this year’s race!

One of the many cool things about triathlon is how many chances you have to redeem yourself in the course of the race. 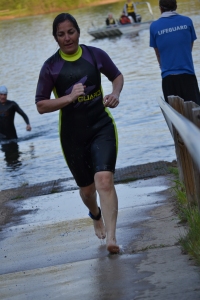 I lost my swim cap in the lake, but at least I still had my timing bracelet!

At Sunday’s Fox Island Sprint, I completely blew the start of the swim, first hesitating right off the bat when I thought I was losing my ankle timing bracelet and then going out way too fast. Completely winded and still seemingly miles from the first buoy, I bailed on my plan to try to do the whole 500 meters freestyle and switched to sidestroke. I alternated the rest of the way and came out of the water about a minute faster than last year — and ahead of four other swimmers, according to Colleen’s eyewitness report.

This may sound pathetic, but to me, beating anyone out of the water is practically cause for celebration. But I restrained myself, because A) I didn’t want to make anybody else feel bad, and B) I vividly recalled how last year I was totally unprepared for how badly I got skunked in the bike segment. 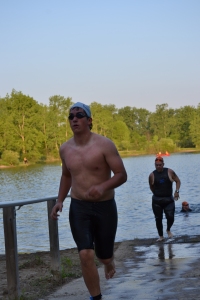 Ben hasn’t swam a stroke in months — and he could tell.

This year I at least had a road bike and was familiar with the course, but I hadn’t practiced much. It was easy to picture getting smoked by all those crazy fast cyclists, but as long as I avoided the dreaded sheriff’s deputy motorcycle escort as the last-place rider, I figured I could take it.

Sure enough, I wasn’t too far out of the park before one of the other swimming stragglers passed me. But then an amazing thing happened: I actually passed another cyclist. A guy, even. On a road bike. He clearly was a rookie, and possibly thought, as I had last year, that biking could only be so hard. No matter. I muttered something encouraging and pedaled faster, gaining confidence.

I knew that last year I’d averaged a miserable 10 mph in this hilly, 20K course. Now I had a speedometer, so I figured as long as I stayed above 14 mph or so, I’d shave several minutes off my time.

It was cool to get farther into the course before I saw the first cyclists returning. Progress! Also, I hadn’t completely lost sight of the guy who’d passed me. More progress. This definitely wasn’t taking as long as last year, and I wasn’t panicking on the hills. Then, as I turned onto the loop that catapulted us onto the return course, I realized I was gaining on a cyclist who’d appeared up ahead. Amazing!

And he did — within a quarter mile or so. But he didn’t’ blow by me, and soon I passed him again. 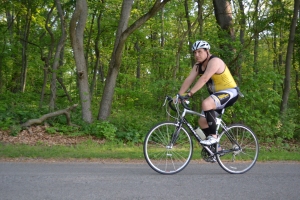 We kept up this little race within the race the rest of the way back, both of us passing the occasional cyclist, including a couple of people peddling furiously on mountain bikes but getting nowhere fast. Finally, I passed my cheerful adversary for good about a quarter mile from the park. Whatever my bike time turned out to be, it was faster because of this guy. And my ride had been a lot more fun, too.

Despite not training, Ben came pretty close to his time last year.

I was so euphoric as I hopped off my bike and took off on the run that I didn’t really notice how many people I was passing, but there were several along the winding road out of the park. After that, the run itself was surprisingly uneventful. Everybody else was too far ahead for me to seriously consider trying to catch. There was nothing to do but keep an eye out for Ben among the returning runners.

Eventually I saw him, looking far more worn out than last year — not surprising, given that he’d put in practically no training. He’d later report that he struggled on both the swim and the run. But because he improved on the bike and in the transitions — last year he’d forgotten to pin his number on his shorts before the swim — his overall time was about the same as last year, around 1:35 (we’re still awaiting the official results.) 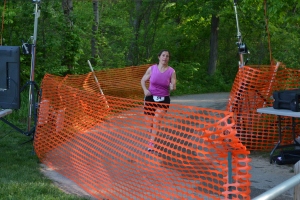 Note to self: Work on looking more euphoric at the finish!

It was cool, heading back to the park, to realize how many people were behind me this year. I gave a high-five to my cycling nemesis as we passed and called out “Good job!” to the others. Incredibly, there was still one person leaving the park as I approached.

I had no idea what my time might be as I turned onto the winding road that led back to the finish line at Bowman Lake. I knew it had to be better than last year’s 1:57. I kept wishing I had someone to push me, but I picked up the pace on my own, eager to see what the clock would say. 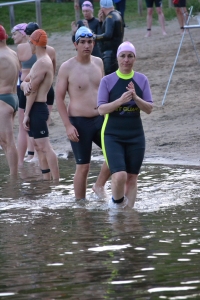 Ben and I test the water.

Finally it appeared around the bend, reading 1:42. My actual time, according to the little slip of paper I got from the timing table, would turn out to be 1:40. A 17-minute improvement — enough to move me from straggler to near the middle, 43rd out of about 60 participants. Incredible!

It was amazing to realize I was now more of a competitor and not just a finisher, at least in the “weekend warrior” sense of the word. Instead of just being glad it was over, I kept thinking how much fun I’d had. I can’t wait to do this again. And this time, I really mean that! 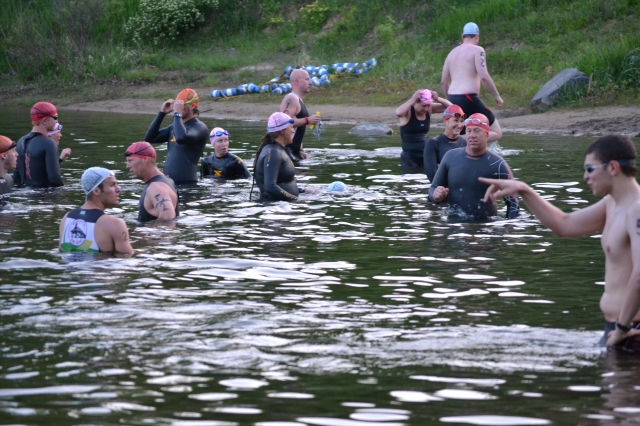 Next time around, I hope to be as relaxed as these folks before the start of the race!

1 Response to Fox Island Triathlon: Shifting out of straggler mode