The woman who outran the guys

“I don’t do long slow distance. Why run slow?” 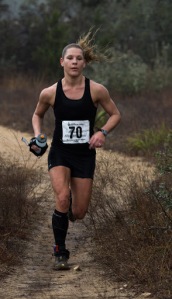 These are the words of Michele Yates, national women’s 50-mile and 100K trail champion, but most interestingly — at least to me — the overall winner of last weekend’s Indy 100, as it’s being dubbed in the endurance running world.

You read that right: This race was won by a woman.

Our newspaper’s race coverage didn’t mention her gender, and neither did my post last week because when I initially read the results I thought Michele must be some funky French spelling of Michael. But I googled Yates as I was putting this week‘s newspaper column together and discovered this 30-year-old Colorado runner came to Indiana last week fully intending to win $25,000 for breaking the national woman’s 100-mile record of 14:57.

Yates finished 2.5 hours off her goal time — running in knee-deep water in temperatures that dipped into the 20s might have had something to do with that — but she still beat the nearest competitor, a guy, by nearly an hour.

You can read Yates’ take on the race on her blog, and her thoughts on why she didn’t finish her first 100 in this interview with Colorado Runner.

Is it unusual for a woman to win a 100-mile race? The men’s national record is faster than the women’s. But this article on endurance runner’s camp suggests that a higher percentage of women entrants finish 100-milers, perhaps because of their higher pain tolerance.

I wish I’d gotten a look at Yates in action. And maybe I did but just didn‘t know it, given the unique weather conditions and the lack of hoopla.

I do remember race director Mike Pffefferkorn talking about getting back to the finish line at some point so he could hand out an award to “our winner” — whom he referred to as a she — but at the time I thought he must’ve been talking about the 50-mile race. It just wouldn’t have occurred to me at the time that anybody — male or female — could be finishing the 100-mile event that fast.