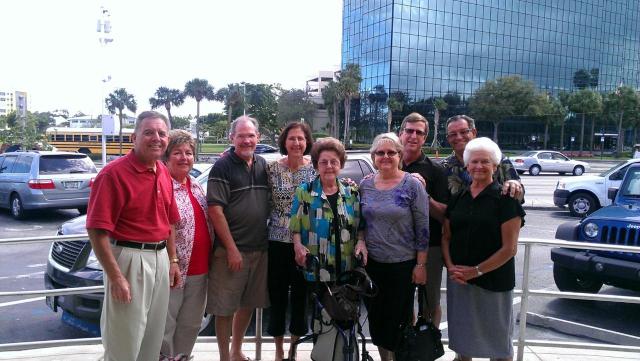 My parents, on the left, visiting Dad’s Aunt Vi and her family during their annual Florida trip.

My parents have been going to Marco Island, Fla., for more than 25 years, but on this year’s trip they did something they’ve never done before: They took along the bathroom scale.

At first my mom thought it was a silly suggestion. Who wants to fret about their weight when they’re on vacation? But my dad insisted, as a way of monitoring his progress in our Wells Weighs In competition. Relentless as usual, he reported in with a progress report nearly every single morning during his beach walk.

A few days into the trip, though, Mom admitted she was glad they’d brought the scale along.

“I worry about my weight all the time anyway,” she said. “It’s not like I don’t think about it just because we’re on vacation.”

This way, she at least knew how she was doing. And because she knew she hadn’ gained any weight — in fact, she’d dropped a bit thanks to daily walks and not going out to eat every night like they do most years — she felt confident enough to weigh in at Weight Watchers both weeks they were there.

By that second week, she was down 3 ½ pounds — a pretty impressive vacation accomplishment.

The scale bounced back up a bit by the time they returned home, after a two-day drive with no exercise and a stop at my brother’s place, where they  indulged a bit more than they did on their trip.

But unlike previous years where going to Florida has derailed Mom’s  January weight-loss resolutions, this year she’s come back still on track. However she fares at this morning’s Weight Watchers meeting, I’m awfully proud of her.

My parents love to walk down and watch the sun set over the Gulf.

2 Responses to Losing weight on vacation