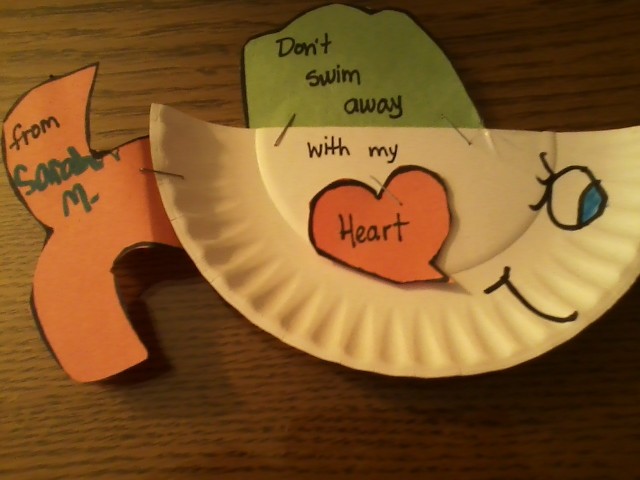 Isn’t this a cute homemade Valentine made by Colleen’s friend Sarah?

Colleen was all set to pack a slice of leftover pizza for her lunch Tuesday when she suddenly remembered her class valentine party was scheduled for that afternoon.

“And Savannah’s bringing cupcakes!” she exclaimed. “I better pack yogurt and fruit instead.”

It was another good decision in a week full of temptations, starting on Sunday when we stopped in to see Baby Kyla and came home with treat bags that Aunt Darcy warned couldn’t be opened until Valentine’s Day. Colleen really did stay out of hers — along with candy from the class party — until yesterday after weigh-in. Then she pulled out a couple of pieces for a lunch box treat and instructed me to deposit the rest in the “candy locker.”

Her efforts yielded only a small loss, just .2 pound, but avoiding a gain during Valentine’s week felt like a victory in itself.

I lost 1.6 pounds from last week, and Grandpa says he dropped another pound. Traci reported a 1-pound gain — but she didn’t get a chance to step on the scale until late in the day, after she’d already eaten a fair amount.

Colleen and her classmates play a game at her Valentine’s party.

Like Loading...
This entry was posted in Uncategorized and tagged Valentine's Day, weight loss, Wells Weighs In. Bookmark the permalink.