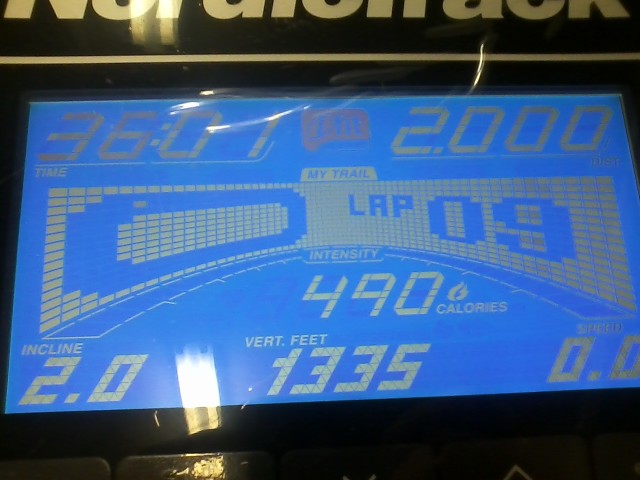 The only number that really matters on the screen above is 1,335 feet — the exact vertical climb in the 2-mile hike to Chimney Tops in Great Smoky Mountain National Park. The workout that generates this climb is below.

Given how many attempts it took to get that climb right, I was starting to think there was no way we could get enough vertical climb to match Clingmans Dome, the highest peak in the Smokies. But it turns out our preliminary strategy of going at the maximum 15 percent incline — which generates a half-mile climb of just under a 400 feet — is actually a bit more than the elevation change of the real deal, which is 330 feet.

Should we taper this back to try to match it? Nah, I don’t think so. The feel of going up  Clingmans Dome is a straight uphill shot, with little variation. Since it’s only half a mile, I like the idea of keeping this as is, a short but intense climb.

Next up: Alum Cave Bluffs. The first two workouts, along with our current “best times,” are below.

Clingmans Dome: 15% incline for half a mile

(On that last part, I just shut down the incline once I got to the desired height. Because it takes a while to adjust the incline, in the photo above it had just returned to 2% incline by the time I arrived at my “destination.”)

My best time: 36:01. I’ve gone a bit faster on preliminary attempts to plot the climb on this trail, but this time I slowed it a bit to make sure I got the numbers right. So now I’ve got something to shoot for, and Grandpa and Traci can try to beat it, too. (Though it’s not really a competition so much as a chance to improve individual performance.)