Working toward a treadmill Chimney Top

Posted on February 6, 2013 by tischcaylor 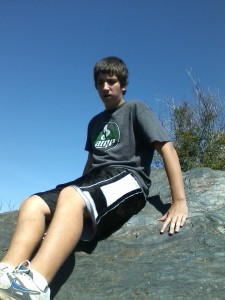 My sister and I sketched out an experimental front half of Chimney Top trail on Dad’s new treadmill on Tuesday. In researching the climb, we suddenly came up with even more incentive to complete our treadmill trail:

The real deal at Smoky Mountain National Park is going to be closed through at least October, due to an apparent landslide and some erosion issues. When we finally do get to hike that trail again, it’s likely to look a little different.

According to the website, the current version of the trail starts at 3,505 feet and ends at 4,840 feet, for a climb of 1,335 feet over approximately 2 miles.

It shouldn’t be too hard to bring the 2-mile total climb in line with the real trail by adding a bit more to the grade on the front half. (We could also do the last mile at the 15 percent max, but it seems more interesting to have a little variation.)

Obviously it’s impossible to mimic the 2-mile downhill return trip on a treadmill. The only option there is to just leave it at a 0% grade. So once we get this “trail” to match the climb, we’ll start timing ourselves, both on the uphill segment (for a shorter workout) and on the “round trip.”