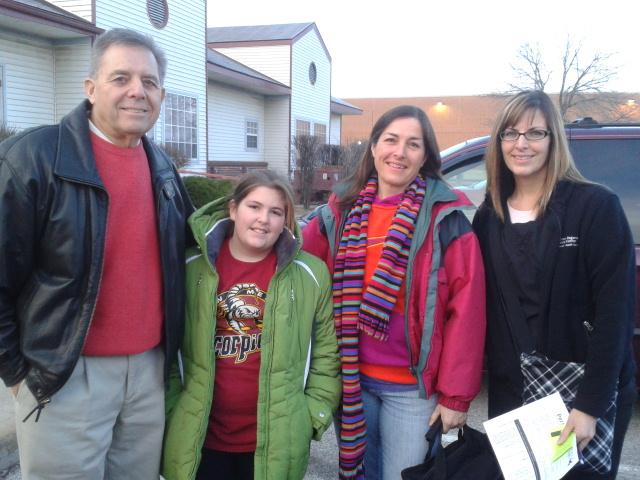 This year’s version of the Fitness Protection Program: Grandpa, Colleen, me and Traci

Minutes before we hit the scales for Wells Weighs In, my sister and I are debating whether to kick Dad off the team.

We figured his gung-ho team spirit would be an asset. Even in retirement, he remains the single most competitive person we know. He’s repeatedly proven his ability to peel off weight whenever he feels like it.

What hadn’t surfaced, until just now, was how little weight he actually needs to lose.

“Six pounds,” he’d said matter-of-factly when I popped the question over breakfast at McDonald’s.

“Are you kidding me?!!” I shrieked. Earlier, when he’d said he  wanted to take off “a few pounds” he’d put on over the holidays, I assumed it was a figure in the double-digits.

“We need everybody to lose at least 10 percent of their body weight to even have a shot at winning,” I said. “We talked about this!”

“You knew my situation,” he shrugged as he fiddled with his phone. He was googling the spelling of quatro, for the team name Traci had suggested: Quatro Shrinko.

“Yes, but you had a whole week to put on some weight,” I said. “That’s the best you could do? One measly pound?”

Colleen, the 10-year-old captain of our as-yet unnamed team, snorts. Grandma, who’s here for moral support, glares. Both, like me, have battled weight issues practically their whole lives.

“I had an ice cream cone yesterday,” he says, defensively. “I’ve been eating like a horse. Enough to make my stomach hurt.”

As if that’s a bad thing.

I’ve written many times about my “undefeated season of weight loss,” but obviously it would’ve been better if I’d never put myself in that situation to begin with. Still, even though I’m pretty confident these days about my ability to lose weight, I have to wonder if there’s another person on the planet who can gain weight like I can.

Earlier that morning, I texted my sister about how I was up 10 pounds in just two days.

“Good job!” she texted back, perhaps a little too caught up in the spirit of the competition.

By the time I stepped on the scale at the Y Thursday, I’d managed to put on 15 pounds from Tuesday morning, when I’d successfully weighed in at goal at Weight Watchers. Heavier clothes and a full bladder probably accounted for 5 pounds of it — along with sweating off a couple of pounds on Tuesday — but still.

The good news, if there is any: All I’ve got to do is get back to my Weight Watchers goal weight, and I’ll have taken off my 10 percent. Anything else will just be a bonus.

No one knows how much Traci weighed in at, but I knew she was taking this weight gain thing pretty seriously. When I stopped by her house last week to see if she wanted to go for a run — we hadn’t worked out together in at least a month — she replied, “Heck no! I’m not doing anything until after that weigh-in. I want to get as fat as I can!”

She never weighs herself, judging her fitness level by the fit of her clothes. Thursday morning as we got registered — Quatro Shrinko was taken, so we just went with last year’s name, the Fitness Protection Program — she guessed she’d put on 15-20 pounds “eating and drinking everything in sight” during her night shift job at the sleep lab.

Afterward, as we gathered in the parking lot for a team picture, she announced triumphantly, “I haven‘t weighed this much since I was pregnant!”

For the record, that was a little over nine years ago. She was in a fairly good mood, considering the task that lies ahead of her. Not to mention the fact that she‘d been up all night.

“I know what to cut out to take the weight back off,” she shrugged. Those large Mountain Dews she‘s been guzzling to stay awake at work? First on the list.

I don’t know about anybody else, but Colleen and I are both pretty eager to start peeling these pounds off. I felt so bogged down during yesterday’s run I could hardly stand it. And Colleen’s hoping that this time — the third year in a row she’s done the contest — is the one that finally helps her get into shape for all those sports she loves so much.

4 Responses to Team turmoil at weigh-in