Why cashews are my new French fries

Posted on January 9, 2013 by tischcaylor 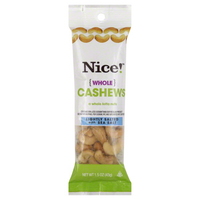 But the other day I picked up a 1.5-ounce pack at Walgreen’s that was easily as satisfying as an order of French fries — same salty, satisfying “mouth feel,” as they say — for about the same amount of calories (250) and Weight Watchers points (7)  but with some actual nutritional benefits that are nonexistent in French fries.

Now, the label on the package doesn’t clue you into this. But if you get on a website like nutritiondata.com, which breaks out minerals and other micronutrients, you discover that a serving of cashews contains twice as much of the “good fats” —  poly- and monounsaturated– as they do of the bad (saturated fats). They also contain phytosterols (which work like cholesterol in reverse) and  minerals like selenium, phosphorous, magnesium and copper.

Getting my cashews in a package about the same size as a small  order of fries helps. Another key from my French fry-eating days: It’s crucial that I follow up my “regular order of cashews” with something that changes my channel so that I’m not hunting around for more nuts. I used to always eat my fries first before I started on my burger. I guess I could pair a serving of cashews with a veggie burger, though fruit seems to work pretty well, too.

The thing is, I feel like I wouldn’t be eating cashews now if I hadn’t given up French fries then. I mean, there’s only so much room in any given day or even any given week for a salty, fatty snack, and in an alternate reality where I’m still a French fry eater there’s no doubt a rather large chunk of my brain that’s devoted to managing my desire for French fries. And a brain thus hobbled would have a hard time also dealing with managing a similar salty fatty treat like cashews.

I still like potatoes, but I pretty much only eat them baked. Baked potatoes are awesome, though I only eat them every so often because of their glycemic load.

The cool thing is, having switched to baked potatoes, I’m not distracted by billboards advertising French fries. They don’t even faze me. They simply don’t apply to me.

But now I get the same “indulgent” feel from a small bag of cashews, which I can have a couple of times a week if I feel like it. And it feels like a major trade up.

Like Loading...
This entry was posted in Uncategorized, What We're Eating and tagged cashews, nuts, salty snacks. Bookmark the permalink.

5 Responses to Why cashews are my new French fries