A Christmas party with built-in restraint 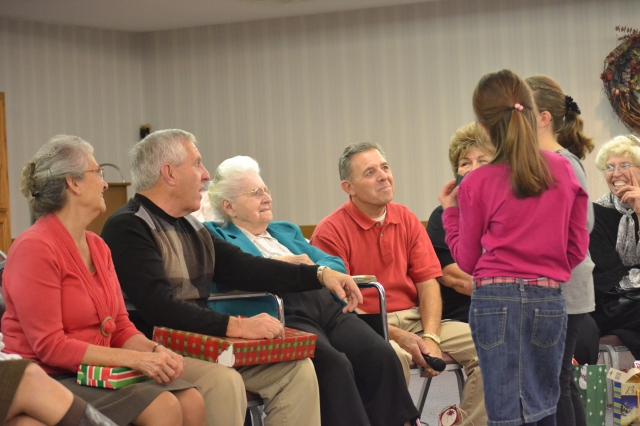 Aunt Genny, Uncle Stan, Grandma Annie-Bananie, and my parents listen to a couple of the girls tell what they bought with their gift money.

It was great to see my 100-year-old Grandma Annie-Bananie holding court at the Isch Christmas Sunday night, the one holiday event on our calendar where moderation is built right into the format.

Saying grace before the meal commences.

It strikes me that many of my Apostolic relatives would disagree with that statement, insisting there were way too many tempting sweets sitting around. But compared to get-togethers on my mom’s side of the family, where menu planning takes into account not only how many people are likely to show but how many times they might refill their plate, this holiday dinner has always seemed much more portion-controlled, down to the sectioned Styrofoam trays and the pre-cut desserts arranged one per plate on a long side table.

It’s not like you can’t go back for seconds, but few do. And it’s a good thing: By my count, we cut 69 pieces of various pan desserts, which worked out to exactly match that evening’s attendance. And yet as always, there were a few pieces left over. If all 96 of Annie-Bananie’s descendants and their spouses had attended … well, there probably would’ve still been a few pieces left over somehow. There’s just some kind of Jesus-feeds-the-multitudes-with-a-couple-of-fish principle at play here. It used to feel a bit disorienting, back in my gluttonous past, but these days I usually find myself trying to figure out what I can learn from a culture that, in large gatherings, at least, tends to treat food as fuel — more so than the population at large, anyway.

I asked Uncle Barry whether he finds himself snacking more now that he and Aunt Imogene have had a grandkid population explosion, assuming that they’d invested in a spare closet full of juice boxes, packaged cookies and other kid treats.  But he said they keep snacks pretty simple; pop corn or graham crackers usually do the trick.

One of Uncle Barry’s many grandkids (this one belongs to my cousin Mirriam and her husband, Zach) thanks her great grandma for her Christmas gift.

From previous discussions I know that Aunty Genny maintains a candy drawer for her grandkids (and now great-grandkids), but I get the sense that opening it is still considered a treat and not just business as usual. It also makes for better environmental control than leaving sugary snacks sitting out where kids and grownups alike are more prone to scooping them up, whether they intend to or not. 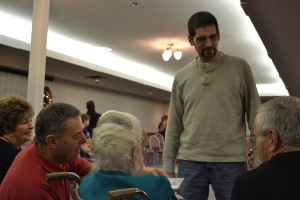 My cousin Lyle, the picky eater.

Meanwhile, I also discovered that my cousin Lyle may be the pickiest adult eater I’ve yet encountered. This is a trait I’ve been trying to acquire the last couple of years — I’ve written before that I’m much more conquest-oriented when it comes to food — and so I’m always interested in getting inside the heads of stubborn eaters. (Not surprisingly, they tend to be thin, and that’s certainly the case with Lyle.)

“I don’t like fruit,” Lyle said, noting that on occasion he’ll eat an apple or banana, but that’s about it. He’s also one of those corn-and-green-beans-only vegetable eaters, and has pretty much abandoned sugar because he feels like it has too much of an effect on his system.

As for the cranberries, he said he didn’t see any point in trying new things that were unlikely to become a regular part of his diet.

This may bear more investigation. Here’s hoping Lyle shows up at the next family get-together. Regardless of which turn the conversation takes, it was nice to see him.

Two of the great-grandkids, Cameron and Abby, try to figure out how to play pool.

Monroe, Dad and Aunt Judy, widow of Dad’s older brother Don, who died a few years ago of prostate cancer. To the left, my cousin Nathan explains to my brother Brian how he managed to snap his Achilles tendon in a ferocious game of group ping pong. 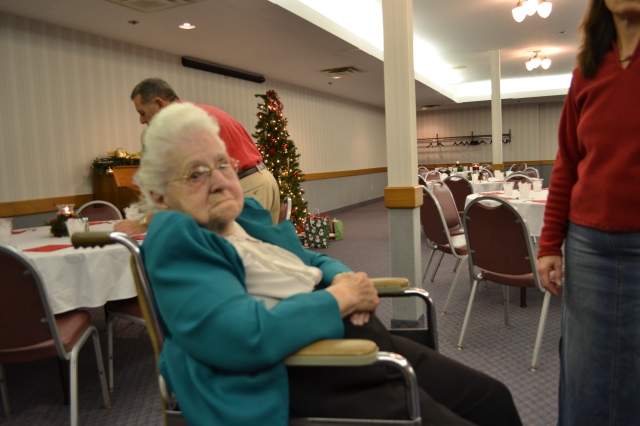 Annie-Bananie arrived downstairs in the party room at Christian Care as we were setting up so she wouldn’t miss a minute of the get-together.

2 Responses to A Christmas party with built-in restraint