It’s 36 degrees as we pull into Potato Creek State Park near South Bend Sunday morning. Steam’s rising off the water, which has plummeted 5 degrees in four days to a chilly 67.

The temperature reading in the truck as we enter the park.

Most of us are in wetsuits of various vintages, except for a few bare-chested bravehearts and a joker in jockey shorts, but because of the weather we’re ordered into the water ahead of the start.

“Splash around, get your face wet,” the announcer commands. “You want to avoid a shock to the system.”

This sprint triathlon is my early birthday present to my sister, to help her hit 40 in the best shape of her life. I never dreamed it would be so cold — or that the body marking crew would scrawl a big “40” on her calf while she’s technically still 39.

Technically she’s still 39, but that’s not what Traci’s calf says.

Traci’s taking all this pretty well. Or maybe her teeth are chattering too much to complain. But the Olympic distance swimmers have already taken off, so we know it’s doable. It’s almost a relief when they finally count off the start for the sprint distance women, because if we’re going to be held hostage in this freezing water we might as well be swimming.

If it weren’t for Traci, I’d be sticking to sidestroke again for my second triathlon. But just two weeks ago — impulsive and stubborn as usual, typical youngest child — she vowed to do freestyle, not worrying about nailing the breathing but just plugging away with her head out of water. Three days ago she finally managed a full 500 meters like that, which had me kicking myself for not pushing harder, for fretting too much about taking risks. Typical oldest child. Sigh.

We put our wetsuits on in the truck with the heater on.

The most freestyle I‘ve managed up til now is 100 meters or so. But eyeing the water — and wanting to get out of it as quickly as possible — I decide I‘m going freestyle to the first buoy. And I do.
I switch to sidestroke to the next buoy, but unhappy with my slow pace, I switch back and wind up going most of the way like that — right up to the point a few feet from the finish where I lose my timing bracelet in the drink.

I touch bottom and turn around to look for it, only to reel back in the water. “Steady now,” says one of the guys who started behind us but have since caught up. He pulls me to my feet. I don’t want to waste too much time searching, especially since I’ve apparently lost the ability to walk, but there it is, floating a few feet behind me. I hit the beach, nearly wipe out  again, then stagger through the chute. 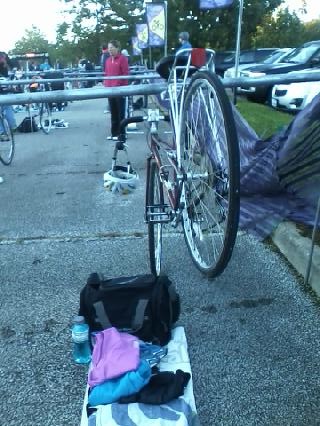 My transition space. That’s Traci two rows over in the pink.

Before long I’m able to trot a bit on the way to transition, where Traci’s now almost ready to go. Our plan was for her to head out on the bike segment ahead of me, figuring I’ll catch up later, since she never got smooth tires put on her mountain bike and I’ve upgraded to an old but workable road bike.

I thought I’d put on warm clothes to bike and run in, but I’m so numb it’s hard to put on much of anything besides my bike helmet. I pull on a tank top and bike shorts and aim my feet for my shoes. Thank goodness for those laces that don’t require tying.

I can’t believe how hard I’m breathing as I head out on the bike. But I’m so grateful to have gears that actually shift this time. This course has more grades than I expected and I don’t have enough gas to stand up on the inclines, but at least I’m able to make the most of the downhills this time instead of flailing away on maxed-out gears.

I keep thinking I’ll run into Traci on her mountain bike. But I also know how demented she can be, and I’m guessing she’s pedaling way harder than I am, albeit on a slower bike. I never do catch her, and she’s not at the transition area, either.

Great. Now I’m going to have to go harder than expected to catch her on the 5K. My lungs already feel like they’re going to explode. (Probably my legs do, too, if I could feel them.)

This is a trail run, and it’s got more uphill grades than advertised. “Push through it,“ I tell myself. “It will get easier eventually. After all, this is my favorite part. Right?”

I am, finally, starting to pass people. Finally I see my little sister up ahead. I think. (This is yet another sign that I need glasses. Her name’s on the back of her shirt, but I’m almost on top of her before I can make out what it says.)

Finally I can relax. Sort of. We don’t slow down, but now instead of being in pursuit mode we’re pretending we’re on a trail run back home. We remind each other to get our breathing under control, tell ourselves that if we can just hold it together we should beat our 2-hour goal.

Looping back toward the beach, the course looks unfamiliar. Was I even processing this when I came through the first time? Apparently not. But we’re feeling better now, picking it up a little the closer we get, and as we round the bend toward the finish we can’t believe our time — 1:41:42. That’s 17 minutes faster than my first triathlon! 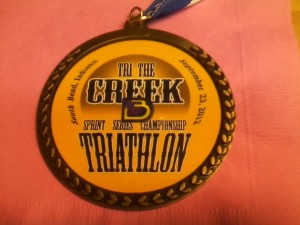 Another surprise: We finish just ahead of the first Olympic-distance male finisher, which means that none of them lapped us. (Little things like this matter when you’re a newbie. In fact, having the Olympic-distance race going on helped a lot with morale, because it created the illusion that we weren’t necessarily near the back of the pack.)

Whatever else happened today, I felt like it was a “win” because of my unexpected swimming feat. Doing it in the cold just makes it seem all the more amazing, that much more of an adventure, now that it’s done.

But the best part of all is that I got to do it with my little sister. And  now she’s hooked, just like I knew she would be.

After the race, wearing our medals. (Next time I might go completely nuts and take that luggage rack off my bike!)