A question of fitness vs. training

At what point do you move from just trying to avoid getting fat into actively training for something — to thinking of yourself as an athlete? 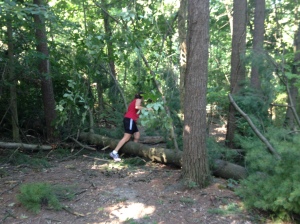 Traci and I were talking about this the other day as we tried to beat the heat by seeking out the shade of our favorite trail at Ouabache State Park — only to be stunned, and somewhat stymied, by the amount of storm wreckage that had occurred even that far into the woods. In some places we practically needed a machete — or better yet, a chain saw — to make it through the web of fallen trees.

Usually by this point in the summer we’re doing some speed work for the Swiss Days 5K in late July even as we’re looking ahead to the Parlor City Trot, a mini marathon on Labor Day weekend.

But between the recent heat wave and our busy schedules, we haven’t been running together much — which in Traci’s case usually means not running at all, just walking or cycling, and in my case generally means settling for shorter distances.

Part of the problem is that our “big races” of the past couple of years no longer seem so daunting. Even a mini marathon no longer seems like that big a deal, as long as we get a couple of 10-milers in ahead of time. But we won’t get any faster without putting in some work. And that hasn’t been happening. The question is, does it really matter?

It all comes down to whether we’re just trying to avoid getting fat, or whether we’re trying to see ourselves as athletes in addition to middle-aged working moms. Our kids’ schedules trump our own, and even when there’s an opening there, it’s hard to know sometimes whether it’s worth it to ask off work for an event, or how much to spend on another race T-shirt.

At this point in my life, I can’t travel very far or blow too much money on a single event. Still, I don’t like the idea of stagnating. And new prospects are popping up all the time — or maybe I’m just becoming more aware of them.

The Veterans Marathon in Columbia City, for instance, is less than an hour’s drive, so that’s something I’d like to shoot for next year.

There’s a Sunday sprint triathlon at Potato Creek State Park near the end of September that might be workable, especially if I could talk Traci into doing it with me. 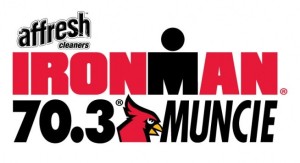 Turns out there’s even an Ironman 70.3 near here, in Muncie this past weekend. Because of the heat, which was up over 100 again on Saturday, race officials wound up cutting the distances in half.

Hearing that made Ben and Traci less bummed about their dreadful times in the 90-degree early morning heat at Saturday’s Loon Lake 5.5K. (Naturally, I had to work.)

1 Response to A question of fitness vs. training