In defense of not being ‘Normal’: Haruki Murakami

In my interviews with so-called “Normal People,” my focus has always been on what little habits come naturally for them that are difficult for the rest of us. I’ve refused to accept the idea that some people were just born lucky; I’ve believed all along that it was possible to learn the habits of a normal person and become one myself, eventually. 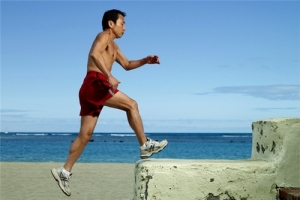 But then I was reading novelist* and runner Haruki Murakami’s memoir over the weekend, and discovered that he’s not only made peace with never being ‘normal,’ but sees his natural tendency to put on weight as an asset that’s made him a healthier, stronger person in the long run.

And he’s been on some long runs in his 63 years: More than 26 marathons, a 62-mile ultra run and a series of triathlons to boot.

Here’s a window into his unique perspective, taken from page 41 of his memoir, What I Talk About When I Talk About Running:

“…if I don’t do anything I tend to put on the pounds. My wife’s the opposite, since she can eat as much as she likes (she doesn’t eat a lot of them, but can never turn down anything sweet), never exercise, and still not put on any weight. She has no extra fat at all. Life just isn’t fair, is how it used to strike me. Some people can work their butts off and never get what they’re aiming for, while others can get it without any effort at all.

But when I think about it, having the kind of body that easily puts on weight was perhaps a blessing in disguise. In other words, if I don’t want to gain weight I have to work out hard every day, watch what I eat, and cut down on indulgences. Life can be tough, but as long as you don’t stint on the effort, your metabolism will greatly improve with these habits, and you’ll end up much healthier, not to mention stronger. To a certain extent, you can even slow down the effects of aging.

“But people who naturally keep the weight off no matter what don’t need to exercise or watch their diet in order to stay trim. There can’t be many of them who would go out of their way to take these troublesome measures when they don’t need to. Which is why, in many cases, their physical strength deteriorates as they age. … I think this physical nuisance should be viewed in a positive way, as a blessing. We should consider ourselves lucky that the red light is so clearly visible.”

*This is one of those books I encountered looking for something else, and so after reading Murakami’s insights on running I found myself wondering about his novels. Turns out I bought one, Hard-Boiled Wonderland and the End of the World, back in the early ’90s when I was much more prone to buying books on a whim. It sat on the shelf for years without me ever cracking it open, and now of course I can’t find it — probably put it in a box to take to Goodwill at some point. I wish I’d bought the hardcover instead of the paperback and held onto it, because I see it’s now selling on Amazon.com for $256.

Like Loading...
This entry was posted in How "Normal People" eat, running, Uncategorized and tagged Haruki Murakami, running. Bookmark the permalink.

2 Responses to In defense of not being ‘Normal’: Haruki Murakami