Making mountains out of marshmallows

Lately I’ve been captivated by a famous psychology experiment called The Marshmallow Test. 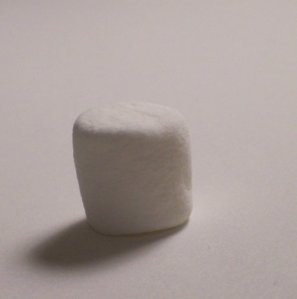 A psychologist at Stanford performed these tests on kids at his daughter’s preschool back in the late 60s and early 70s. The kids could choose from one of three treats: a marshmallow, pretzel or Oreo. They were then left alone in a small room,  not much bigger than a closet, with their selection.

There was no penalty if they ate the Oreo. (As a marshmallow hater, I naturally assume most kids picked Oreos.) But if they could wait until the researcher returned in a few minutes, they could have two Oreos.

Not surprisingly, only about a third of the kids had enough impulse control to wait for the better deal. Those who did managed to distract themselves by kicking their chair or fiddling with a pony tail or doing anything, really, other than looking directly at the treat. Those who did the best pretended it wasn’t real — that the marshmallow was a fluffy cloud, for example.

But most kids gave in really quickly. (One kid was filmed secretly licking the cream filling off the Oreo, then reassembling it and putting it back on the plate.)

Years later, the psychologist was surprised to discover that regardless of their intelligence levels, the kids with better impulse control went on to have higher SAT scores and more overall success in school. Thirty years down the road, they had better jobs. Higher salaries. You get the picture.

Over the years, though, this study has also generated another finding, and this one’s more encouraging for those of us who, as kids, would’ve failed the marshmallow test:

Those original “failures” weren’t necessarily doomed for life. Some eventually did learn to master impulse control. Forty years later, researchers are studying those “kids” — now about my age — to see how they learned to make the switch.

Like Loading...
This entry was posted in Mind games, Uncategorized and tagged impulse control, marshmallow test, psychology. Bookmark the permalink.