The view from Claddagh Irish Pub in Newport, Ky., across the river from Cincinnati

Coming out of the Newport Aquarium across the river from Cincinnati Thursday afternoon, all six of us were ravenous. 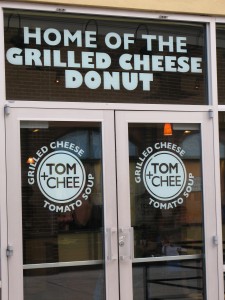 But we bypassed the first restaurant we came to on the Levee at Newport, because nobody felt like Fish Market fare after we’d just spent two hours gawking at sharks and giant Asian sea crabs.

We decided against the next eatery we came to as well, despite the novelty of eating at the “home of the grilled cheese donut”.

Finally we wound up at Claddagh Irish Pub, which promised an interesting mix of traditional fare and vegetarian options, along with a spectacular view of the Ohio River.

I ordered an Irish coffee, which hit the spot, though Ben said it tasted “like somebody peed in it.”

Bob pronounced the kettle chips with cheese and onion sauce “the classiest potato chips in history.”

Our other appetizer, roasted red pepper walnut dip with rustic bread, was just so-so. Actually, the dip was fine — “it tastes like hummus with nuts,” Ben noted — but the bread was boring.

Rowan’s entrée, mushroom ravioli with Alfredo sauce, was the best of the bunch. Ben and Bob’s fish and chips were good, but not as good as those of another Ohio River eatery, the Broadway Tavern in Madison, Ind.

I can never resist trying a veggie burger that doesn't just come from a freezer pack.

My veggie burger, the kind made on the premises rather than pulled from a freezer pack, was awesome. I subbed out the pub chips for a salad, which I topped with a chunk of Ben’s fish. (He got a wedge of veggie burger in return).

The kids look through a telescope at the riverfront.

For the second day in a row, I was really struck by how less stressful it is for me to eat in restaurants these days. I no longer feel like I’m walking a tightrope, trying to stick to acceptable choices.

I really did prefer eating a giant salad with my veggie burger rather than a few oil-soaked potato wedges. One taste of each appetizer was enough to satisfy my “conquest” impulse.

And one interesting restaurant meal per vacation day is plenty, as far as I’m concerned.

I can’t help wondering, though: Would we have been as taken with the atmosphere of Claddagh Irish Pub if we’d eaten at the one in Indy rather than this one on the banks of the Ohio?

They gave us a coupon to use later. Who knows, maybe we’ll find out.

Would you feel like seafood after seeing the suction cups on this sucker?

Like Loading...
This entry was posted in Uncategorized, What We're Eating and tagged Cincinnati, Claddagh Irish Pub, Newport Aquarium. Bookmark the permalink.