A Christmas run at the cemetery

It would’ve been so cool to have done a destination run to the Ossian cemetery for our annual Christmas Eve candle lighting at my grandparents’ grave. 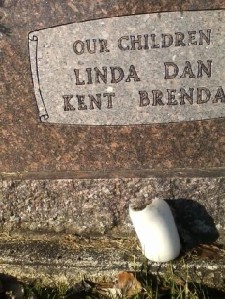 The candle from our traditional Christmas Eve candle lighting at my grandparents' grave in Ossian.

Ever since 1994, the year both my maternal grandparents died, my brother, sister and I have gone to the cemetery to light a candle in memory of all those Christmas Eves spent at Grandma and Grandpa Decker’s house.

This year, though, my shoulder was aching so bad I took a pain pill and wound up sleeping away most of the evening. I didn’t get in a run, I completely missed hanging out with some friends who stopped by, and I never did make it to the cemetery.

So Christmas morning, after opening gifts with the kids, I went over to pay my respects and take a couple of laps around the cemetery.

I found the candle my brother Brent and his wife Darcy had lit there on Christmas Eve. Or at least I thought I did. Turns out the one I saw was last year’s. I was going to light it again, but I would’ve had to have done major surgery to get to the wick.

It’s hard to believe how many years have passed since 1994. My grandparents were both 72 when they died, just a few months apart. They’d both be 89 now if they were still living — a decade younger than my dad’s mom, Annie-Bananie, who turned 99 this year.

I took a lap around the section where they’re buried, noticing how many more tombstones there are now than there were back then.

It was a great day for a run. It always feels good to get out in the cold and stretch your legs on Christmas day, I think. Unfortunately, I messed up my shoulder/pinched nerve moving an overly heavy gift earlier this week, and it’s set me back in my recovery. Two laps was about all I could handle.

I’m glad I went over there, albeit a day late. I’m glad I got in at least a little bit of a run.

But next year, I’m definitely going to run to the cemetery instead of driving.

Like Loading...
This entry was posted in running/fitness, Uncategorized and tagged Christmas run, Ossian cemetery. Bookmark the permalink.