Five years ago Linda Tobey Duesler was 58 years old, 264 pounds and suffering so badly from arthritis she was walking with a cane. Now more than 110 pounds lighter, she’s teaching Fort Wayne to hula hoop for fun and fitness.

For Duesler, a self-employed Realtor, bariatric surgery provided a key momentum swing that helped resurrect her love of dancing, which then led to a new obsession with fitness hooping.

Q. What led you to try bariatric surgery?

Another factor, Duesler says, was her age. She’d heard that surgeons were reluctant to perform the surgery on people over age 60, so she figured if she were going to act, she needed to do so soon.

How do you eat now vs. before you had bariatric surgery?
“I eat a smaller meal than most people. I don’t push it.  I know I have to stop at a certain point. A restaurant meal probably contains about three times what a person really should eat. If I order a regular dinner, I either share it, or eat about a third and take the rest home. I can usually get two more meals out of it.”

“After surgery, there just isn’t room. You physically cannot fit too much in there. And you don’t want to, because it hurts. It’s not the easy way out. But it’s an option for people who don’t have other options.

Do you keep a food log or count points or carbs or anything?
“I don’t anymore. At first, I’m sure I did. I haven’t any problem maintaining, really. I just listen to my body, just kind of watch.”

Do you find that your tastes have changed?

Duesler reports that she eats much less sugar and dairy than she once did — primarily because her body tolerates neither very well since her surgery. She believes that drinking a lot of protein shakes after her surgery led her to become lactose intolerant. “Two or three bites of ice cream are OK,” she says, “but a whole bowl would give me stomach cramps.”

The same with sugary foods. Once, she says, she couldn’t get enough of the large bakery style cookies like you get at the mall. “When I was fat, I could really pack those away. But now if I have more than one, I get sicker than a dog. … I can eat a little sugar, but if I eat too much, I get a tummy ache. But that’s what happens to normal people, I think, you know?”

Probably the biggest difference, she says, is that she now prefers quality over quantity.

“Now I only put good food in my mouth. Before I would enjoy buffets because you could fill up. Now I might go to a buffet, but it’s almost a waste. I never do a Chinese buffet anymore; I’d rather do a nice Japanese restaurant. My sensitivity has changed. I’m more discriminating.” 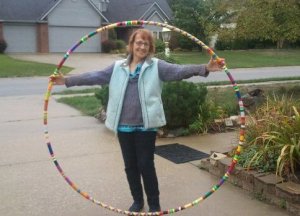 How did you get into hula hooping?

It started with dancing. She and her husband used to love to dance, so when they heard a friend was offering salsa dancing classes, they signed up. The dancing was really helping  her take the weight off after her surgery. Later, Duesler brought a hula hoop to a party at the salsa instructor’s house and tried incorporating it into dancing. That got her interested in exploring fitness hooping via online tutorials, and now she not only teaches hooping classes but makes her own weighted fitness hoops.

“Hooping is not hard,” she says. “It’s a weight-bearing, cardio, core exercise, but it’s not really hard on your joints. I’m not a jogger, I could never be a runner. I don’t jump rope with a hoop like the young girls do. But I do enjoy dancing and hooping. You can do it at your own pace, do whatever’s comfortable for you.”

Do you worry about gaining it all back?

“Some people have bariatric surgery and then go back to their old ways. Some of them do actually wind up gaining back everything they lost. That would be so depressing.
The surgery is only a tool. You have to do the rest of it yourself.”

Last Christmas, Duesler noticed that she’d slowly gained 20 pounds of her original loss. But she didn’t panic. Instead, she simply cut down on night-time salty snacks, and cut back from 1-2 glasses of wine per night to 2-3 per week.

“It was just a matter of doing a little bit of adjusting,” she says. She’s since lost 16 pounds of what she regained, and though she’d like to lose a couple more, she says it’s OK if she doesn’t.

Any other exercise adventures on the horizon?

“About a month ago my husband and I bought kayaks. We’re just going crazy in our old age.”

*A weight loss master, according to “Eating Thin For Life” author Anne M. Fletcher, is someone who’s lost at least 20 pounds and kept it off for at least three years.