Blazing a trail amid rubble

For as long as I can remember, my family’s burned off tension and calories by walking laps around my parents’ driveway. Eleven laps per mile has been the standard for the last 43 years. 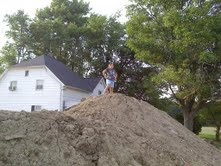 Now that oval-shaped driveway is gone, obliterated by a bulldozer to clear space to add a sun room and garage to their old farmhouse.

As cool as the new addition is likely to be — it’s a project my parents wrung their hands over for at least a decade before pulling the trigger — I couldn’t help missing the old “track.” This is exactly the sort of thing that can derail a fitness program. But it doesn’t have to. Though none of us, including my parents, used the driveway as our exclusive fitness path, we decided we didn’t want to waste any time finding a new place to pace. So yesterday, at a Father’s Day get-together, my sister and I decided to blaze a new trail around the exterior of the property.

This new “path” is far from ideal. The grass is lumpy in some places, we have to duck  under tree branches at one point, and as we emerged from the stretch that took us behind the old grainery, a giant toad leaped up and whacked me in the shin, much to my sister’s amusement. (I guess I shrieked a little bit, thinking at first it might be a snake.)

I was thinking this new path was really going to take some getting used to — until we measured it with a smartphone app and discovered the new “track” is just about exactly a quarter mile. Four laps to a mile. Which means our walks will likely become that much more purposeful, now that we won’t be so likely to lose count.

“It stinks that it’s not a track or a driveway, but in some ways it’s better,” Traci said. “I’m actually really excited about it.”

Naturally, it wasn’t long before somebody — probably me — brought up that old adage, “When one door closes, another one opens.” I’d been thinking about that recently as I nursed a swollen, purple toe that took a direct hit from a Ben fastball. It made me sick to my stomach to think I might have to give up running while my toe healed, but I was trying to do what I always tell my kids: Keep a positive outlook.

Luckily within a few days I was able to run again. But if I do get injured at some point, I guess that will be a good time to take up biking or swimming or something else. After all those years of letting various roadblocks get in the way of a regular exercise program, I’m not about to let anything stop me now. 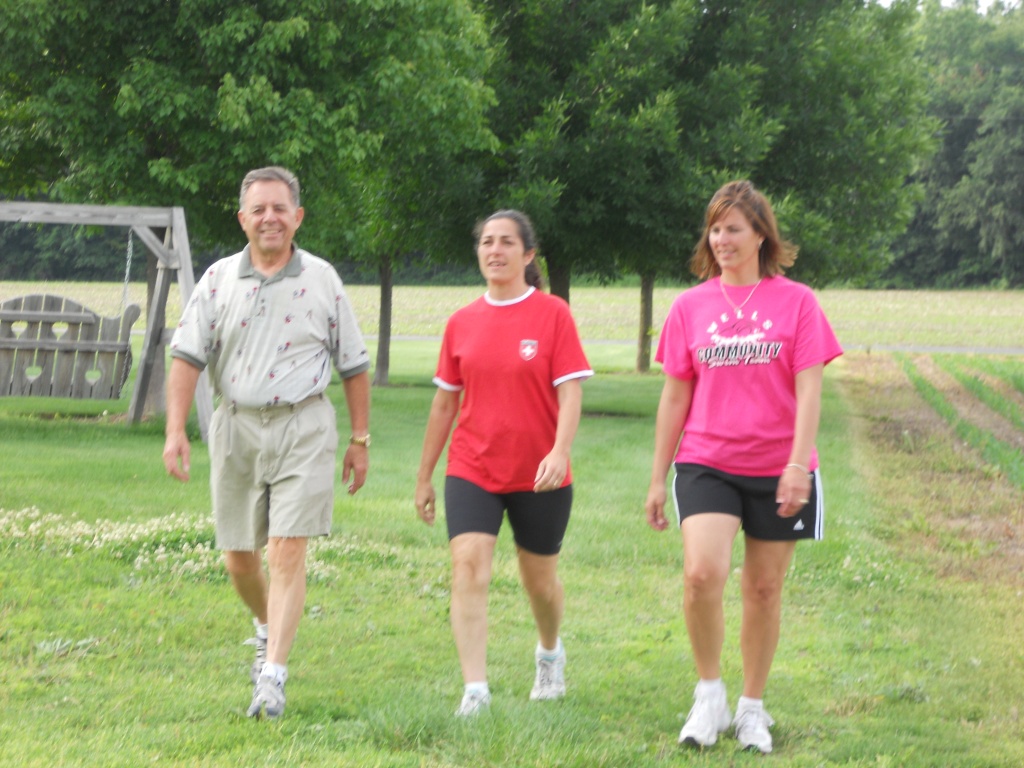 Our new “fitness trail” at my parents’ place. That’s my dad on the left, me in the middle, and my sister Traci on the right.

Like Loading...
This entry was posted in running/fitness, Uncategorized and tagged exercise roadblocks, fitness trail, positivity. Bookmark the permalink.