Carl Broman is the quintessential renaissance man: Software wrangler for a Chicago nonprofit by day, guitarist in the folk-blues-bluegrass band Mad Bread by night, cartoonist for a cooking blog on the side — and did we mention his secret life as a doughnut reviewer and his past (extremely short) career as a would-be mayoral candidate in Bluffton, Ind.?

To check out Mad Bread music and videos, go to http://www.madbreadband.com/

But enough about all that. What we really want to know is this: What do renaissance men like to eat?

Q. So how did you guys come up with the name Mad Bread — does it
actually have anything to do with bread?

A. The other guys pulled it out of, ahem, thin air, long before I met them. Some story about getting hungry and walking to the grocery store and talking about buying a bunch of bread. Like, mad bread, dudes.

Q. Do you eat much bread these days? Weren’t you a guy who was prone to baking your own loaf once in a while, back in the day? Still do any of that?

A. I don’t eat as much bread as I used to. I do have a bagel for
breakfast a few times a week. Yes, I used to bake and eat lots more
yeast bread and quick breads, but only rarely now. I pay a lot of
attention to the amount and type of carbohydrates I ingest.

Q. How much of what you eat is dictated by what you think is good for
you, vs. eating what you like to eat?

A. I’m confident that what I like to eat is mostly stuff that is good for
me. My view is that food is good for you. What’s bad for you is eating
too much or too little, being out of proportion. Or eating stuff
that’s not food. I love vegetables. I love unprocessed whole foods. I
do eat some junk, but it’s proportionally pretty little.

But I’m sure this answer will completely collapse when I examine what I’ve actually
been eating. I just went to an all-you-can-eat fish fry tonight and
had six big pieces of fish. That was too much oil. I also had a giant
mound of the best cole slaw ever. I told them to replace the french
fries with an extra order of slaw. It had a light yogurty slaw
dressing. No problem there. And I just drank a big dose of Metamucil.
(TMI !!)

Q. You’ve called the cruller a “tasty, rubbery little snack” and saluted Jewel Glazed Yeast Raised Rings for leaving a “puddle of glaze” in your briefcase. As a doughnut reviewer, what would you say is your favorite doughnut?

A. The platonic doughnut.

Q. If you were on Death Row, what would you request for your final meal?

A. Three pounds of steamed fingerling potatoes and two pounds of steamed
fresh green beans, all in a pool of butter, salt, and pepper. Eight
thick-cut crispy fried slices of bacon. And a bottle of pinot noir.

Q. As a kid, how much control did you have over your Halloween candy?
Did you have to hide it from your brothers and sister?

A. I think my mom exerted some control. I don’t remember candy being a
huge deal, but maybe I’ve just forgotten. Except there was one episode
where my brother Nels and I had a huge plastic bag full of candy from
one of our News-Banner paper routes, all the customers were giving us
candy, and I kept giving him disgusting unidentifiable taffy
butterscotch fruit peppermint caramel crunchy chewy globs one after
the other for a couple of hours one night. I kept feeding them to him
and laughing at him.

Q. Do you eat breakfast? If so, what?

A. Bran flakes or oatmeal with plain unsweetened soy milk. Or a plain
untoasted wheat bagel, sometimes with peanut butter. Vitamins. Fish
oil. Acidophilus. Always lots of coffee. On weekends I fry eggs and
vegetables together in peanut and olive oil, and top it with salsa, or
often I’ll walk to the Jewish deli and get a mish-mosh bagel and lox
with tomato, cucumber, onion, and cream cheese.

Q. What is your biggest weakness, food-wise? How do you deal with it?

A. Not planning ahead and having to settle for crappy food away from
home. I deal with it by crying bitter tears and sobbing as I chew.
Like the walrus and the oysters.

A. Yes, I pig out. Like at the fish fry tonight. I just move on. I’ll eat
mass quantities of no-carb veggies in one sitting, and there’s no
atonement. I raise my fists and belch in defiant victory.

Q. If your jeans get a bit snug or you see an ominous number on the
scale, what do you do?

A. Eat less. I’ve only done that once, about a year ago. It worked! Had
to buy new pants.

Q. A lot of people I’ve interviewed have told me they really, really
hate feeling “stuffed” or overly full. Does that pertain to you?

A. I guess I don’t hate it that much.

Q. Do you do anything in particular to get exercise? If so, how much
is for fun and how much is to stay fit?

A. Not really. I do more walking here in my Chicago neighborhood, where I
can walk or take public transit for practically everything, where
driving is a pain in the ass, than I ever did living anywhere else.
Walking sure does make me feel good, so why the hell don’t I do more
of it?

Q. Anything you want to add, or wish I would’ve asked?

A. This is fun, thanks for asking. I’ll just add that I love my big
ceramic noodle bowls with the embedded translucent glass nodules. I
get them cheap at the shops in the Vietnamese neighborhood over at
Argyle and Broadway. 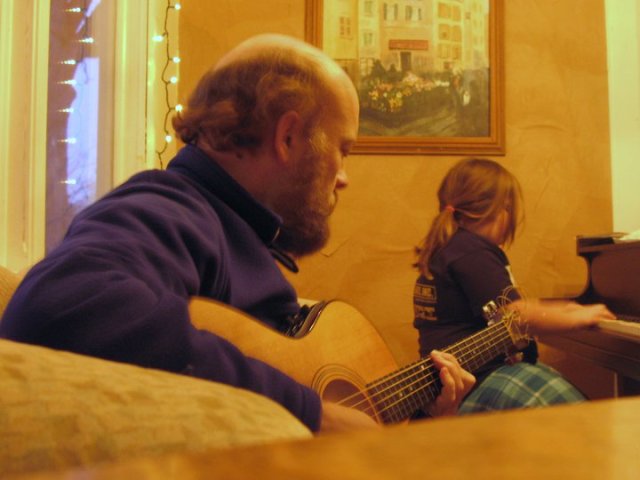 Carl jamming with Colleen on Christmas Eve at our place after our first annual "pie buffet."

Like Loading...
This entry was posted in How "Normal People" eat, Uncategorized and tagged Carl Broman, Hoq normal people eat, Mad Bread, Popeye Save Us. Bookmark the permalink.